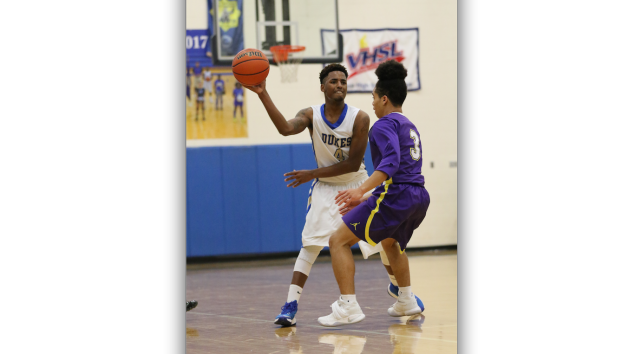 Cumberland County High School senior Darius Kyle is a team captain for the Dukes and will be someone they count on during the 2017-18 season (photo by Titus Mohler).

Dukes looking for major growth on the court

The Cumberland County High School varsity boys basketball team is off to a 1-1 start to the 2017-18 season, and its coach sees potential for major improvement over last season.

“My expectations are always high, as usual,” Dukes Head Coach Tyrone Mosby said. “I’m just trying to get the kids to match my expectations every year. So, I’m looking at a better season than we had last year. We should at least triple our wins.”

The Dukes feature only upperclassmen on the roster this season, with four seniors and eight juniors.

“It should be a great group of guys to coach, and they’re definitely coachable, so that helps out a lot,” Mosby said.

The only loss of the year so far for the Dukes was a narrow one, as they fell 65-64 in their season opener against host Monticello High School.

Key to Cumberland’s efforts this year will be junior center Christian Jackson.

“He’s come a long way since last year, and he’s going to be our focal point,” Mosby said. “So, as long as he stays health and does the things he’s been doing, he’s going to be the one we ride to the end.”

The younger brother of T.J. Jackson, who is currently playing football for Virginia Tech, Christian stands 6 feet, 6 inches tall and is playing on varsity for the first time this season.

Mosby said what he brings to the team is “his size, being able more doing that because I’ll get more turnovers and bad shot selection from trying to speed things up. Basically I’ve just been able to calm down and let the game come to me. That’s what my coaches have been emphasizing to me.”

Where last year he took it on himself at times to single-handedly put the ball in the basket, he’s now using designed screens to create separation from his defender. Where he once took off for the basket the second he saw an opening, he now waits for his offense to set up to allow for more passing options and better rebounding positions for his teammates.

The newfound approach has transformed Walton from a rogue scorer into one of the Big South’s best all-around players. Entering Saturday’s game at Virginia Military Institute, he ranked third in the conference with 18.9 points per game and among the league’s top five in field goal percentage, free throw percentage, three-point shooting percentage and steals. He is shooting better from all three spots, including a blistering 47.4 percent from three-point range.

“This year we’re a really good ball movement team,” he said. “My teammates are finding me in good positions, so I give a lot of credit to them. I feel like we’re just getting better every game, and we have to keep submitting to that and what coach is telling us to do.”

Finding the product of the system

BY CHRIS COOK LongwoodLancers.com There comes a time for every athlete when talent alone carries them only so far, when... read more