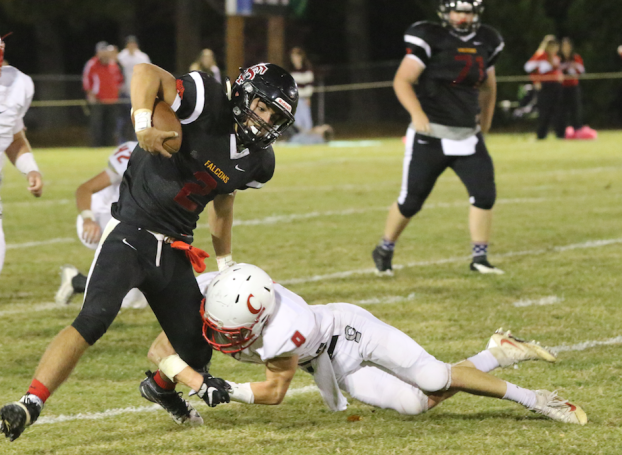 Fuqua School sophomore Elijah Warner, No. 2, and the second-seeded Falcons will look to defeat visiting No. 3 Quantico Middle/High School on Friday in the VISAA Division III state semifinals (photo by Titus Mohler).

Fuqua Head Coach Ben Manis said it is hard to get game film on the Warriors because their coach does not want to trade, so it is necessary to work connections to find some.

“From what I’ve seen, they’ve got four or five really good athletes,” he said. “Their two tailbacks are probably some of the better athletes that we’ve seen.”

Manis noted Quantico’s run-heavy offense is not very complex, but the Warriors are good at what they do.

He said that on defense, the Warriors “try to outnumber you in the box. They’ll leave some receivers open. They’ll leave some guys unguarded and just trust in the fact that they’re going to get there before you throw the ball. … They’ve got kind of a unique defensive alignment where they’re rushing two guys off the edge — both edges.”

The coach later added, “Hopefully we can exploit the holes in their defense. If we can’t, it’ll be a long night. If we can, it’ll be one of those games that everything just hits right.”

As of Wednesday morning, Manis said everyone on his team was largely healthy. They have been acclimating to colder weather in practice, good preparation for Friday’s game-time temperature, which could be in the 20s or 30s.