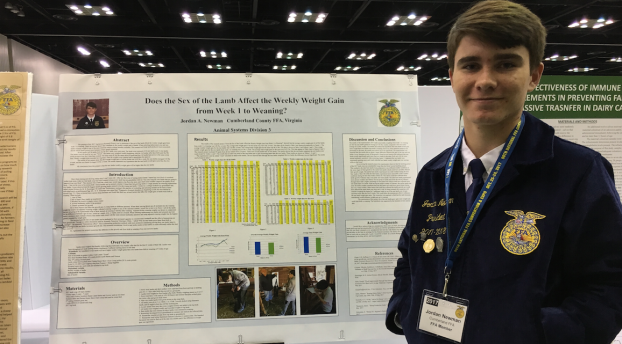 Jordan Newman displays his board at the FFA National Convention.

“He placed 10th and got a silver medal for it,” Paris said.

He said Newman’s research project was comparing the growth rate of boy and girl lambs to see which ones grew faster.

“In the project… he has a manuscript that he has to submit along with an interview where he explains his project and answers questions,” Paris said.

He said the family is, “very proud of him.”

FFA member since he was in seventh grade and previous to that he was in 4-H and competes in livestock shows with his sheep,” Paris said. “He’s the president of the local FFA chapter in Cumberland and attending national convention was a really tremendous experience for him.”

He said he had the opportunity to meet other FFA members from across the country and talk with other agroscience contestants.

“He’s looking forward to competing again next year,” Paris said. “He’s already started talking about what he’ll do for a project next year. He feels very confident he’ll make it back into the state.”

According to a press release from Cumberland County Public Schools, more than 63,000 members and guests attended the convention this year.

“During the convention, in addition to competing, FFA members participated in workshops, leadership development activities, and enjoyed the opportunity to meet FFA members from across the United States,” officials said in the release. “…attendees had the opportunity to visit with representatives from Agriculture colleges from across the country and visit at the trade Expo.”

The release cited Newman was accompanied on the trip by Alex Parker, a ninth grade FFA member.

“The boys participated in convention sessions held at the Bankers Life Fieldhouse, home of the
Indiana Pacers, attended a Rascal Flatts concert at Lucas Oil Stadium, home of the Indianapolis Colts, attended workshops and visited the Expo showcasing many, many agriculture related companies and colleges,” officials said in the release. “They also visited the NCAA Hall of Champions, which is near the convention center.”