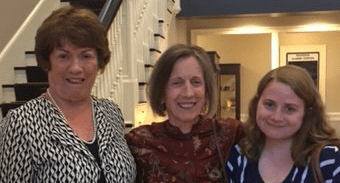 Dr. Jane Richardson Taylor, middle, attends a dedication ceremony held Oct. 20 at Longwood University with her daughter, Sara, right and Francine, her sister on the left.

Andy Taylor lived for only 13 months, but an early childhood development center recently dedicated by Longwood University and named after him carries a legacy celebrated by the school and his loved ones.

Dr. Jane Richardson Taylor, of Leesburg, described Andy as an irresistibly cheerful and social infant who didn’t stay up late into the night and affectionately took in the world around him.

“Anytime you came into contact with him, he made you smile because he smiled first,” Taylor said.

She noted her son was named Andrew after her grandfather but that everyone called him Andy.

Andy had died two days after an accident that resulted in a severe brain injury.

Taylor said she had always wanted to do something to honor her son following his passing. She said as an assistant high school principal, she had considered creating scholarships but said no ideas had stuck with her until her brother recommended donating funds to Longwood.

Taylor was in Longwood University’s Class of 1974 and has spent nearly 20 years teaching and directing preschool programs very similar to the Andy Taylor Center for Early Childhood Development. She currently serves as director of St. John the Apostle Preschool in Leesburg.

Manning had suggested to Taylor to name the center after her son.

“I said, ‘Well gee whiz,’ that would even be better,” Taylor said.

Taylor dedicated $1 million to developing the center earlier this year.

“Everywhere I went, there were plaques, and plates on benches and all, and they all said, ‘Andy Taylor,’” Taylor said. “I’m very sentimental, it happened a very long time ago, and it was just like everything came together when I saw his name and I saw the center … It was wonderful, everything I ever wanted in terms of doing something in his name.”

She described Longwood as the area that taught her how to be a teacher and noted the small-town environment in Farmville. She remembered passing by Dowdy’s Furniture Store on Main Street and frequenting a jewelry store where sorority members would purchase engraved bracelets for each other. She noted her excitement of Weyanoke Hotel being renovated.

Dr. Sara Miller, administrative director of the Early Childhood Development Initiative (ECDI), said she was both touched by Andy’s story and Taylor’s dedication to the center and its offerings.

“When Jane learned about what we were doing with the early childhood development center and our plans for what we wanted to accomplish, I know that she was really excited and interested because it aligned with some of her own passions and areas of interest,” Miller said. “She has seen the impact that quality early childhood care and education can have on children.”

She estimates about nine students are currently enrolled in programs this week, with between 10-15 coming to classes over the next few weeks until the end of the calendar year. Miller estimates 12 additional students are set to enroll in the spring, and Miller said she and others at the center expect the numbers to increase.

Miller described the dedication as a time to honor Taylor and Andy’s story.

Events across the Heart of Virginia will honor veterans this weekend as part of a celebration of Veteran’s Day, which... read more