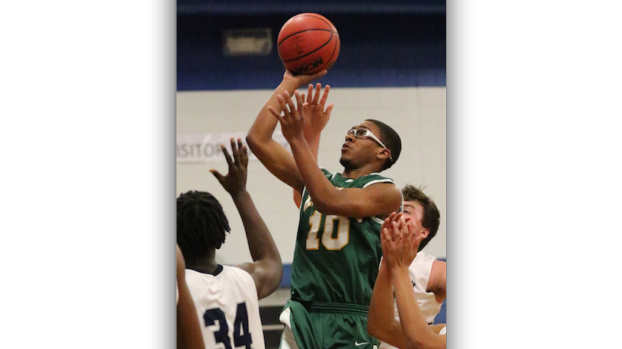 Buckingham County High School point guard Andrew Johnson Jr. goes up for a shot during the 2016-17 season. He will be representing his country in Barbados on a team in July 2018 (photo by Titus Mohler).

As stated on the organization’s website, “It is the mission of STUDENTathleteWorld Tours to provide opportunities for young athletes of various ages to represent their country in international athletic competition while gaining a broader perspective of the world through overseas travel. Our goal is to select young men and women of high character who successfully portray their country to the highest degree in the sport that they love.”

Johnson said it was USA Student Athlete World Tours that first approached him based on the strength of his abilities as a basketball player.

“I’m on this recruiting website, and I think they had looked at my profile and seen my highlight reels and everything, and they liked what they’d seen, and they had texted me about it, and that’s how it all got started,” he said.

Players selected to be on the team are tasked with helping raise funds for the trip.

On the “Request for Donation” form that USA Student Athlete World Tour provides, it says, “Players are chosen for this trip from a pool of applicants from around the country based on a combination of athletic attributes as well as academics, leadership abilities and character.”

Johnson said the organization spoke with him about “how well-disciplined I was. I think they also reached out to my coach, and they had explained how I’m a good leader, not just doing it during basketball but also out in the community.”

“I’m very excited for A.J.,” Boyers said. “He’s a great young man that works extremely hard both in the classroom and as a part of our basketball team. Anytime you can represent your country it’s a great honor and accomplishment and one that he’s deserving of. We’re extremely proud of him.”

Johnson said it was a few months ago that he was approached and applied for the opportunity that will involve a trip to Barbados, extending from July 18-24, 2018.

He said that making the team “means a lot to me because not many people from Buckingham County has the opportunity to go out and represent the USA, and I think this is a good experience for me because I haven’t been outside of the U.S., and it’ll be a good chance to see how other countries and communities are (run) and how they work.”

“We’re also going to be doing a benefit program on Jan. 14th at the Frances Redwood Center in Dillwyn,” he said.

For a Longwood University men’s basketball team that entered Sunday winless and without six players due to injury, good fortune... read more