John Robert Carter went home to be with the Lord on Nov. 9, 2017. He was born in Cumberland, VA on Sept. 13, 1938, to the late Andrew and Martha Jane Carter. He received his education at Old Green Creek and Luther P. Jackson schools. He moved to New Jersey, married his childhood sweetheart and lifetime love, Catherine Bernice Scruggs, and returned to Cumberland, VA a few years later. They had four children, Deborah, Selena, John, and Antoinette, he loved and was loved by his grandchildren and others who affectionately called him Pepa. 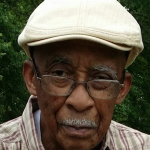 He accepted Christ and joined Old Green Creek Baptist Church where he served in several capacities to include trustee, sexton, and treasurer. He formerly sang with the Voices of Faith and Carbone Gospel Singers and sang on the combined choir and men’s chorus until his health began to fail. Some of his favorite songs to sing were, Everybody Ought to Praise His Name, God is Able, You Don’t Know What the Lord Has Done for Me, and Heaven is Looking Down on Me. He kept his sense of humor and quick sense of wit into his final hours of life.

John was a good provider and instilled an excellent work ethic in his family. He was employed by several companies to include Dukane Heating, Hometown Liquor, The Shoe Factory, and retired from Carbone of America where he was a machine operator for over 30 years. He served in a custodial position at Virginia Employment Commission, Sovran Bank, and Johns Memorial Episcopal Church where he was also the groundskeeper.

A homegoing celebration was held at New Life Assembly of God on Tuesday, Nov. 14, 2017, at 1 p.m., with interment at the Old Green Creek Baptist Church cemetery. The family received friends at the Randolph Volunteer Fire Department.