David was born in Johnson City, Tennessee June 9, 1940. David and his family moved to the Guinea Mills area of Cumberland, Virginia in 1947 after his parents purchased Shady Brook farm sight unseen after reading an advertisement in the back of a magazine. 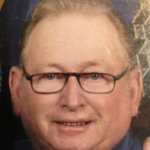 David loved being outdoors and spent his youth on the farm raising chickens, cattle and hogs. David loved to hunt and trap and collect Civil War artifacts and arrowheads from around the farm. David gained his love for the outdoors and nature from his parents and was even quoted in The Farmville Herald as a 17 year old boy –

“My father, mother, and I have spent many happy hours strolling through the woods or along a winding brook on our farm. My parents taught me the names of trees, wildflowers, birds, wild animals and, insects.”

As a high schooler, David was active in 4H and FFA and competed on the Forestry Judging Team. David was recognized by FFA as one of Virginia’s Top Farm Youths in 1957 – 1958. David was one of 32 students that graduated from Cumberland High School in 1958.

After high school, David continued farming on the family farm and started his own small business, Erwin Logging. David continued in the logging business until the mid-1990s when he then started another small business, Dave’s Recycling. David served businesses throughout Central Virginia and their cardboard recycling needs. David affectionately became known throughout Central Virginia as “The Box Man”. David remained an active farmer until the early 2000s.

David loved music and learned the play the piano and the accordion by ear.

He will be greatly missed.