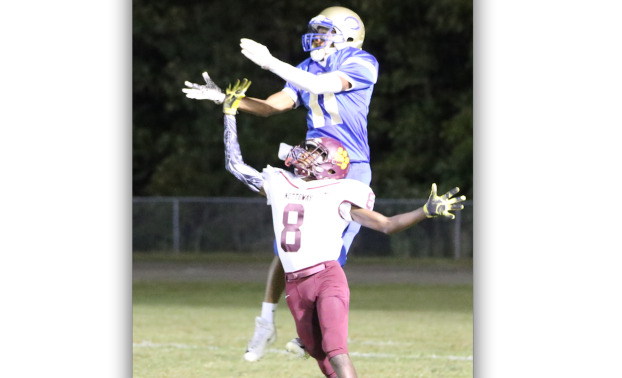 Cumberland County High School’s varsity football team may have had a difficult season, but its individual standouts have received recognition at the district and now at the regional level, with the Dukes drawing six All-Region 1B selections, including two on the first team.

“You’re always pleased when you get any kind of honors,” said former Cumberland Head Coach Edgar Knapp. “All those kids deserved it, so we’re pleased by it.”

Coaches in the region honored Cumberland senior Keyshawn Diming with three selections. He was named to the first team as a kick returner, and he made the second team as both a defensive back and as a wide receiver.

For the year, Diming returned the ball 24 times for 647 yards and four touchdowns.

As a receiver, Diming recorded 19 catches for 331 yards and a touchdown, averaging 17.4 yards per catch.

Opponents tended to go away from him when they were on offense, but he still registered 34 total tackles, including 26 solo tackles and one tackle for loss.

“Keyshawn was All-Conference 42 at defensive back as a 10th-grader and 11th-grader, and so it didn’t surprise me at all, really,” Knapp said of Diming’s regional accolades.

Junior Christian Jackson made the all-region first team as an offensive lineman.

The Dukes generated 1,202 yards and seven touchdowns through the air and 803 yards and six touchdowns on the ground thanks to help from Jackson blocking up front.

“Chris is a big boy,” Knapp said, estimating him at 6 feet 7 inches tall and 305 pounds. “He’s going probably to play at the next level pretty high up. … Chris was right on the cusp of being first team in the district, and it doesn’t surprise me at all that he was first team in the region.”

Building on an experienced core