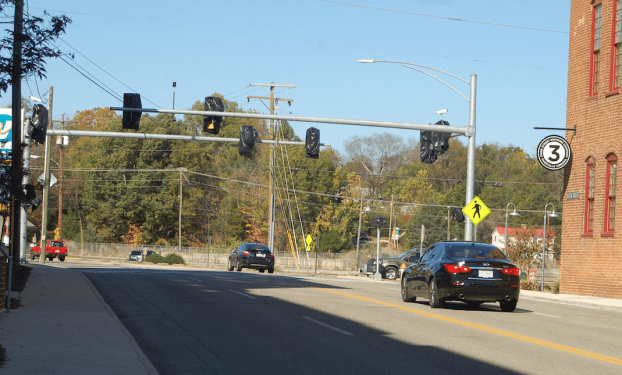 A stoplight at the intersection of St. George and Third streets will begin operating this week (photo by Morgan White).

Why is there a new stoplight at the intersection of St. George and Third Street? What is the data behind recent speed limit changes throughout the Town of Farmville?

A new stoplight at the intersection of St. George and Third streets will begin operating the week of Thanksgiving.

Spates noted that the stoplight more than anything was for pedestrian safety.

“We’re just trying to protect the public, you know, both the motorist as well as the pedestrian so that’s why we’re looking at these speed limits,” Spates said.

The stop light was put in place weeks following a change in speed limits around town at the Oct. 11 Farmville Town Council meeting.

He said he’s heard people comment that the town is using it to “work radar,” meaning the town lowered speed limits to give more speeding tickets.

“Why do we need to change the speed? Is there even a real reason? Traffic is terrible sometimes, and having people drive slower is even worse,” said Taylor Titi, a Farmville resident, in a comment on Facebook in response to a previous Herald article noting the changes. “It’s just another reason for cops to ticket people more than they already do.”

Titi’s comment was one of approximately 28 comments that responded in disagreement with the speed limit change.

“We’re doing it for the safety of the public,” Spates said.

According to the Traffic Records Electronic Data System — a database compiled by the Department of Motor Vehicles that includes crash data information — There have been 21 accidents on Third Street so far in 2017. None of the accidents involved pedestrians, and the accidents resulted in 11 injuries. Three of the accidents were speed related.

A help in serving warrants