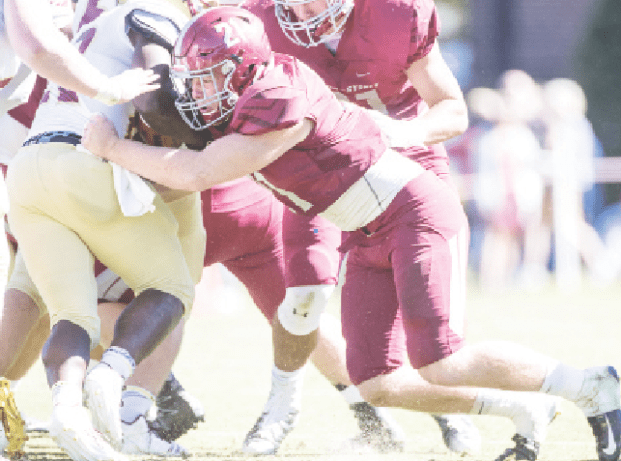 HAMPDEN-SYDNEY COLLEGE ATHLETICS H-SC sophomore linebacker Griffin Davis has been named the ODAC Defensive Player of the Week after recording a team-high nine tackles Saturday in the win against Guilford.

Tigers hold for 21-18 win over Guilford

Hampden-Sydney College’s (H-SC) football team improved to 2-0 in the Old Dominion Athletic Conference (ODAC) on Saturday with a 21-18 victory against host Guilford College.

“I really thought it was our best game of the year,” Tigers Head Coach Marty Favret said. “(The Quarkers are) good. I thought all three phases contributed. Clearly our defense has been a pleasant surprise so far. We went down, beat a good team on the road and that’s hard to do in our conference, so all smiles over here right now.”

On the day, the Tigers recorded 369 yards of offense with 247 passing and 122 rushing. Junior quarterback Alec Cobb was 29-of-43 for 247 yards with two touchdowns and one interception.

Senior running back Mike DeMasi had another big game, running for 116 yards on 13 carries.

Defensively, the Tigers held Guilford to just 289 yards of offense with 210 coming through the air and only 79 rushing.

“Our linebacker Griffin Davis led us in tackles again,” Favret said. “He’s been named ODAC Player of the Week defensively, so he’d get a big paw from me on his helmet. He’s had a great year so far, and he really played well Saturday.”

In the conference, “we’re tied for first place right now. We can’t ask for anything more than that. Every week’s going to be a battle, but unlike last year, I think we’ve put ourselves in position this year where we’re hopefully playing meaningful games in November.”

Hampden-Sydney (4-2, 2-3 ODAC) will return to action Saturday as the Tigers host the Apprentice School on Homecoming weekend. Kickoff is set for 1 p.m.

Fuqua School’s varsity football team did not come away with a win Friday night, but it showed it belonged with... read more