According to a press release, Foster was an honor graduate of Cumberland County High School. 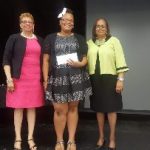 “Throughout her high school career, she participated in several activities such as cheerleading, basketball, softball, the National Honor Society, Project Discovery and FBLA,” officials said in the release. “Her community activities included Relay for Life, Adopt-a-Highway volunteer and a Youth Conservation Crew Member.”

She is attending Norfolk State University where she is majoring in nursing and minoring in Spanish. She is the daughter of Curtis and Kim Thurston-Foster, of Cumberland.

“Goodman was an honor roll student and graduated from Prince Edward County High School,” officials said in the press release. “As a high school student, she participated in varsity volleyball, tennis, the concert band and random acts of kindness.” The release cited her community service activities included being a Pregnancy Support Center volunteer, a blood donor, church soup kitchen volunteer and a playground tree planting participant. “Goodman is attending Longwood University,” officials said in the release. “She is the daughter of Bianka Holman Goodman, of Buckingham.”

For the 75th consecutive year, millions of youth, parents, volunteers and alumni across the country celebrated National 4-H Week during... read more