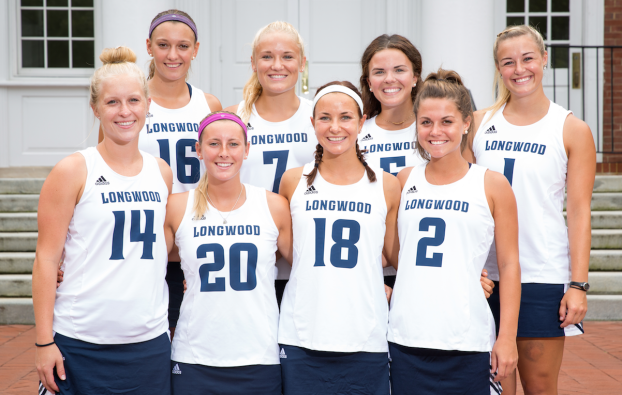 The eight members of the team that were recognized Sunday — Lil-Sophie Achterwinter, Kate Colley, Maddie Kendrick, Brenna Kinzel, Lorissa Morton, Edel Nyland, Abbey Ripley and Sarah Vrhovac — have defined what the term “student-athlete” means, embodying that hard-work mentality on the turf and in the classroom that has come to epitomize the team under 10th-year Head Coach Iain Byers.

Their collective success in all facets of the student-athlete experience generated a team-record GPA last season, the first Lancer to apply for the prestigious Rhodes Scholarship and this season, the program’s first 10-win campaign since joining the Mid-American Conference (MAC) four years ago. At that time, the eight-player senior class was a group of deer-eyed freshmen.

In their tenure in the Lancer blue and white, the 2017-18 field hockey seniors have come together for 32 wins, going from six wins as freshmen to seven as sophomores, nine as juniors and now 11 as seniors with two games left on the regular season slate.

Consequently, Longwood has improved its standing in the MAC each year this group has progressed, rising from a fifth-place finish in 2014 to fourth in 2015 and third in 2016. This year, with the seniors now holding the reins, Longwood is 11-3 overall and 4-1 in MAC play, having clinched a spot in the MAC tournament with its victory Sunday.

That this senior group has continued to help the program raise its bar is no surprise to Byers.

“The impact that they’ve had — you can see it from a skill point of view and how we play a better brand of hockey, but we look at it more from a character and cultural point of view,” he said. “The culture of the team now, in comparison to four years ago, is very different and much improved. That’s done through hard work and tough choices and being able to put the long-term goal of your success first, rather than the short-term difficulty of having a conversation or putting in some work and improving later. We always knew it was a talented class. Ever since day one, they’ve gotten a good amount of playing time and experience.”

Byers added, “There are a lot of players that do a lot of the team-oriented stuff that the team as a whole needs to be successful — the Kate’s (Colley) and Sarah’s (Vrhovac) of this world. They do that out of sacrifice for the team because they realize how important it is for the team to be successful.”

Not only is the senior group collecting wins, they’ve reeled in an astounding 17 All-MAC honors, including all-conference, all-academic, scholar-athlete and Player of the Week awards. Among those, three-time All-MAC forward Nyland broke Longwood’s single-season goals record last season, and Achterwinter is making a run for her third straight All-MAC selection.