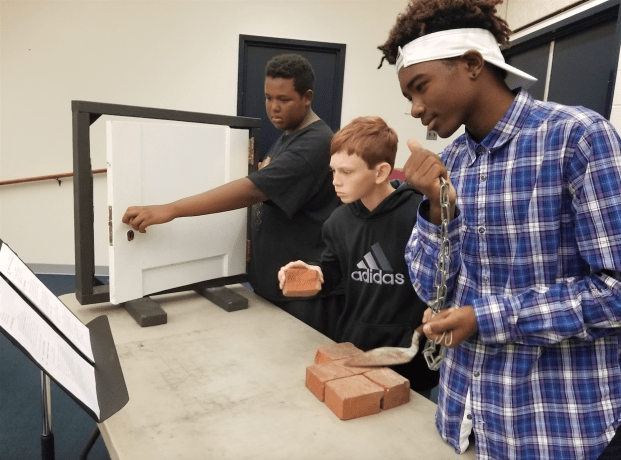 Several departments from Cumberland County Middle and High schools are looking to deliver some timeless scares.

The middle school’s advanced band, the high school theatre department and the high school culinary arts department will be putting on an old-time radio show, performing a chilling rendition of “The Cask of Amontillado,” based from a short story written by the king of haunts, Edgar Allen Poe.

Tickets are no longer on sale. The dinner will begin at 6 p.m., and the performance will begin at 7 p.m. at the combined middle and high school cafetorium. The show is estimated to last about 30 minutes.

A flyer for the event cited the entertainment is geared toward adolescents and adults but that children are welcome to attend.

“The Cask of Amontillado” centers around a narrator who describes the unique and disturbing way he gets revenge on someone who insulted him.

Gordon said the format is meant to replicate the style of radio dramas that relied on one’s imagination and sense of hearing.

“While you can certainly watch what all the performers are doing, you could also close your eyes throughout the event and receive the full effect of the performance,” Gordon said.

Gordon said organizing old-time radio shows had been a successful endeavor during the years he worked in Powhatan County, describing old-time radio as an art form that has experienced a recent renewal in popularity, with clubs and organizations centering on recapturing the atmosphere and storytelling of radio dramas popular in the 20th century. He said this is the first year Cumberland has taken on this type of performance.

He said about 40 members of the band will provide all of the music for the show, playing classical tunes such as “Funeral March of a Marionette” by Charles Gounod and “The Sleeping Beauty” waltz by Pyotr Ilyich Tchaikovsky in addition to what Gordon called incidental music, played during scenes to heighten atmosphere or mood.

“The kids are definitely excited to perform it,” Gordon said of the show. “…I think members of the community are very interested in the novelty of the idea and are looking forward to see what’s it all about,” Gordon said.

He noted it gives the band and other departments an unconventional way to hone their artistic crafts.