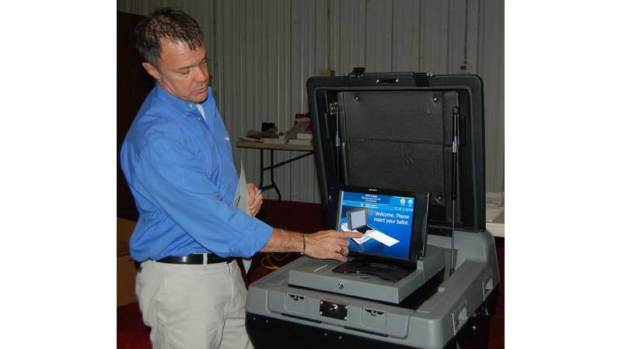 Tyler Lincks, Virginia account manager for Print Elect, demonstrates the process of submitting a ballot to the new voting machine that will be at Prince Edward County polling places on Election Day, which is Nov. 7.

In gearing up for Election Day on Nov. 7, Prince Edward County Registrar Lynette Wright held training for poll workers Oct. 19 regarding using new voting machines, which will include paper ballots submitted to a machine as opposed to an all-electronic system with a touchscreen interface used in previous years.

“This system is already in use and has been for a few years in a number of localities in Virginia and the reaction has been pretty positive about the simplicity of its use by officers of election and by voters,” said Tyler Lincks of Print Elect, the Virginia account manager that conducted the training.

Lincks said voters will receive a ballot and will walk to a voting booth where they can read the ballot, then color in an oval, which will appear next to the candidate’s name that they wish to vote for. Following their choice of candidate, voters will take the ballot to a scanning device into which they will scan the ballot, a process which counts the votes. The ballot will then be collected in a box inside of the voting machine.

“We had the DRE systems that got outlawed three weeks ago, but we already had ours in place before that happened,” Wright said. “It’s paper ballots, so it should be a whole lot easier. I know a lot of people sometimes get intimidated when they have to mess with electronics.”

According to a press release from the Virginia Department of Elections, the decertification of the Direct Record Electronic (DRE) voting equipment in Virginia was approved in an effort to increase the security and integrity of Virginia’s voting systems ahead of this year’s election.

District 7 Board of Supervisors Member

District 3 Board of Supervisors Member

District 5 Board of Supervisors Member

District 6 Board of Supervisors Member

HALIFAX — Del. James Edmunds, R-Halifax, is sponsoring a Fireman of the Year contest award. According to a press release,... read more