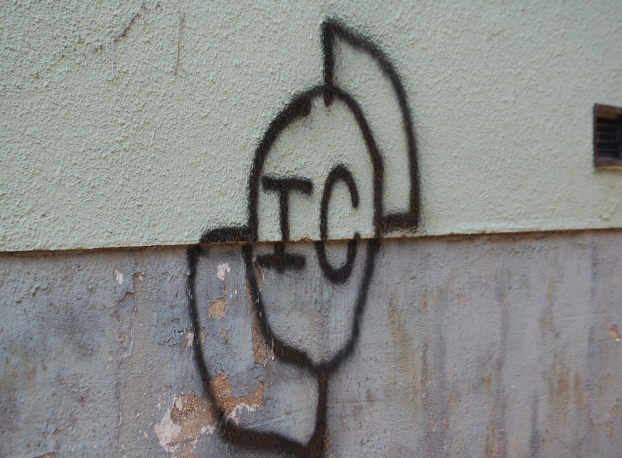 Police responded Thursday to graffiti spray painted on the wall of an alley between a Walk2Campus property and The Farmville Herald on North Street. An incident involving the same symbol and lettering was reported on the back wall of Farmville Wholesale Electric Supply Co. the same day (photo by Emily Hollingsworth).

Two more buildings Farmville were struck by instances of vandalism Thursday — similar to what was discovered last Wednesday at a mosque in downtown Farmville.

The locations discovered and reported having been vandalized Thursday morning included the back wall of Farmville Wholesale Electric Supply Co. on 301 W. Third St. — in view of pedestrians along the High Bridge Trail State Park that passes the back of the building — and an alleyway between a Walk2Campus property and The Farmville Herald on North Street.

Both instances of the graffiti contained a circle with two shapes on either side with the letters “IC” inside the circle.

Farmville police were on scene at both locations Thursday morning, and said the incident remains under investigation.

The graffiti, in black letters included a four-letter expletive starting with the letter “F,” followed by “God & Allah.”

The graffiti had the letters “IC” with a circle around the letters and two shapes drawn on two sides of the circle.

Police said there were no developments regarding the incident at the mosque nor the additional reports of vandalism.

Those with information should contact Detective Sam Entrekin at the Farmville Police Department at (434) 392-2127.

The Farmville Area Habitat for Humanity has selected five new partner families to build with in 2018 — two of... read more