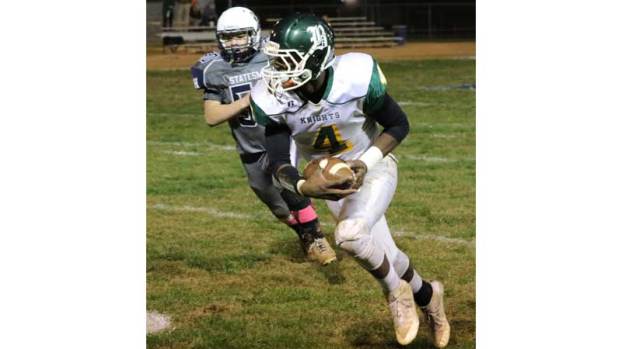 Knights improve to 4-5 with blowout win

“We’ve just been a different team since the bye week,” Knights Head Coach Josh Wallace said. “We’ve been able to regroup and get some guys back that were out for injury, and we just kind of hit our second wind.”

He noted that a different offense was installed that changed up the dynamic a bit and took a little while to get used to, but then it happened.

Wallace described his team’s performance Monday as a little rusty, but the execution was there to create the win.

Jumping out to an early lead, the Knights held a 14-0 advantage after one quarter, led 33-0 at halftime and was up 46-0 after three quarters. The Knights made it 53-0 with eight minutes, 43 seconds left in the fourth quarter before finally allowing a touchdown with 6:12 remaining.

Wallace refrained from highlighting a standout player on offense.

“Once again, I think it was a team effort,” he said. “First of all, the way our offense runs, we have so many people running the ball and so many different people blocking. Defensively, there’s quite a few guys that made good plays.”

He added that senior linebacker Bryce Leake was really shining out on the field.

After starting the year 1-5, the Knights have engineered a remarkable turnaround to the point that it may not even end up being a losing season for them.

Wallace started coaching at Buckingham in 2016, leading the Knights to a 2-8 record.

He said that the significant progress demonstrated by the team this year means a lot.

He noted that if the Knights “go 4-0 in our last games and win every game by two touchdowns or more and we set a school record in the process, it means a lot, but we’ve got to finish strong.”

Buckingham set a school record for most points scored in a varsity football game when it won 84-21 against host  Cumberland County High School on Oct. 13.

Fuqua School’s varsity football team jumped out to a 29-point lead in the first half of its homecoming game Friday... read more