John Alfred “Cap’n John” Pierce, 92, of Arvonia, passed peacefully at his home on Oct. 17, 2017. He was born Sept. 12, 1925 in Laurel Park, New York, the son of the late John Leroy and Mary Catherine Pierce. He was the widower of Ruth Nichlaus Pierce. 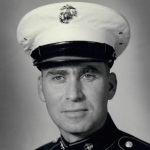 John was a Master Sergeant in the United States Marines, serving in both World War II and the Korean Conflict, receiving two Purple Hearts and the Silver Star medals.

Following his retirement from the military, Cap’n John became a charter boat captain and later a commercial fisherman based out of Hatteras, North Carolina.

Funeral services will be held on Friday, Oct. 20, 2017 at 2 p.m. at the Dunkum Funeral Home, Dillwyn. As per John’s wishes he will be interred in Arlington National Cemetery.

Memorial contributions may be made to the Arvonia Volunteer Fire Department, P. O. Box 55, Arvonia, VA 23004.