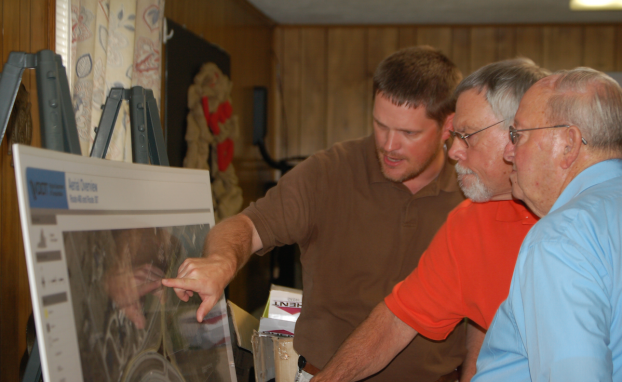 Along with learning about the project, Prince Edward County residents were afforded the chance to view graphics and maps, voice questions and air concerns to Virginia Department of Transportation (VDOT) engineers during an informal hearing Sept. 14 regarding a planned improvement project seeking to enhance safety at the intersection of Route 460 and Route 307 near Rice. The meeting took place at the Rice Volunteer Fire Department.

According to Lynchburg District Location and Design Engineer Brian Casto and a project description provided by VDOT, the existing right through lane on Route 460 West will be dropped, giving vehicles entering 460 from Route 307 a dedicated lane and removing a stop sign currently at the intersection.

A right-turn lane on 460 West currently serving Route 307 will also be reconstructed and lengthened.

The cost of the project is estimated to be approximately $2.7 million, with $450,000 dedicated to preliminary engineering, $362,975 dedicated to all right of way locations around the intersection and a $1.9 million dedication to construction, according to the project description and VDOT spokeswoman Paula Jones.

The project is estimated to be completed by the fall 2020, according to the project description.

Casto and Jones said that the need for the project came after seeing a high rate of vehicle accidents at the intersection of 460 and 307.

Currently, those entering 460 West from 307 have to stop at a stop sign. Drivers unaware of the stop sign may rear end vehicles in front of them.

Casto said the informal nature of the meetings gives people greater opportunities to ask questions and receive information about the project.

“VDOT staff meet with folks to interact directly and personally,” Casto said. “(They can) address concerns a lot easier than standing at a podium.”

Janet and Richard Stoner, of Rice, in addition to members of their family, have experienced accidents on the two roads.

Richard expressed concern about the project, noting that the road layout could impede traffic by motorists having to make a complete stop on a busy highway in order to turn right to Gully Tavern Road.

“I’m not sure it’s not going to create new problems,” Richard said.

While she said the current design has problems, she said the projected design only offers additional space for drivers entering 460 without proper measures to prevent new accidents.

“It’s giving a little more space for people to make the same mistake,” Monahan said. She also expressed concern about how incoming retail businesses, including the approved Dollar General store, could impact travel.

Joseph M. Randolph, of Rice, expressed support for the project, noting the numerous accidents that have taken place at the intersection.

“I think it would be a good idea,” Randolph said regarding the project. “There are so many vehicles ramming in the back of one another at the stop sign. Now they can keep going.”

Simpson compared the projected design to what he said was a similar intersection of routes 360 and 460 to enter the town of Crewe, saying the intersection works well.

Those with questions or concerns can contact the Project Manager Renard Yeatts at renard.yeatts@vdot.virginia.gov or (434) 856-8258.

Farmville 801 District Supervisor and Board Vice Chairman Pattie Cooper-Jones of the Prince Edward County Board of Supervisors was given... read more