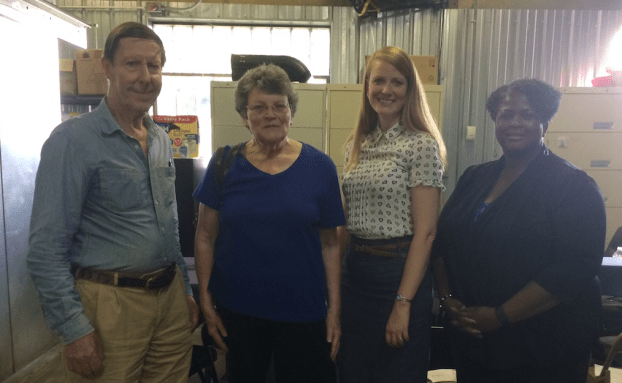 Members of the committee in charge of the FACES Food Pantry Backpack Program pose for a photo. Pictured are, from left, Ellery Sedgwick, Anne Lund, Kristen Topham and Antoinette Carter-Chaffin.

“We work with the Prince Edward Public Schools and the schools, school guidance counselors and teachers to identify students who they think are at risk of not getting enough to eat over the weekends,” FACES Food Pantry President Dr. Ellery Sedgwick said. “And we find that that’s worked very well as way of identifying those most in need. The school has been very helpful (and) very cooperative.”

“The idea is to provide six meals — two breakfasts, two lunches, two dinners — that are easily prepared by the kids themselves so they can just use the packs whenever they want to make themselves a meals,” Sedgwick said.

“There are a couple boxes of cereal, cereal and Pop-Tarts and some fruit or peaches for breakfast. There’s soup and mac and cheese for lunch and for dinner there is ravioli and spaghetti.”

He said there were also miscellaneous items distributed in the backpacks as well.

Sedgwick said a couple hundred of the backpacks were donated by an insurance firm located outside of Richmond.

“(In) the beginning of the season, the backpacks are packed with both school supplies and food and they will be distributed on Friday mornings,” Sedgwick said.

He said the bags will be distributed every Friday to students with the exception of when students are out of school.

Last year, FACES handed out 40 bags to students each week.

“This year, so far, we have 20 at the elementary school and eight at the middle school. We expect that number to grow,” Sedgwick said.

Sedgwick said the committee in charge of the backpack program has approximately 12 members.

“The basic core, I think, is four or five different churches and each church takes a week of the month,” Sedgwick said regarding those who pack the bags.

One hospitalized from collision

One pilot was hospitalized as a result of a collision that took place at the Farmville Municipal Airport Friday morning,... read more