Earl S. Bracey, Sr., of Greenville, passed away Oct. 29, 2017 in Dillwyn. He was born Feb. 25, 1927 in Chateauguay, New York. He was a World War II veteran and in 1947 joined the volunteer fire department in Simsbury Connecticut and later the Winsted, Connecticut and Dillwyn departments. 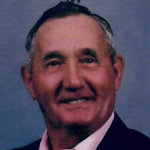 He was preceded in death by a son, Elliott Bracey.

Funeral services will be held, Wednesday, Nov. 1, 2017 at 7 p.m. at the Dillwyn Fire Department. The family will receive friends following the service. Interment will be in the Forest View Cemetery, Winsted, Connecticut . Memorial contributions may be made to the Dillwyn Volunteer Fire Department, P. O. Box 276, Dillwyn, VA 23936. Dunkum Funeral Home is serving the family.