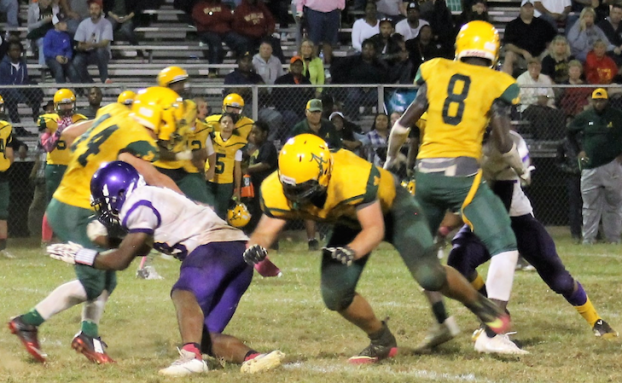 Photo by Bre’nesha Mosby of the PECHS Yearbook Staff.

Prince Edward County High School’s varsity football team held a four-point lead going into the fourth quarter on Friday against host Amelia County High School, but the Eagles were not able to keep it, falling 24-20 to the Raiders. The Eagles struggled with running the football, which has been their primary source of offense thus far in the season. The team took a blow when running back J’Sean Dupuy went out with a dislocated elbow. He will be out for several weeks. Running back Rahme Marshall had 10 carries for 70 yards, and Dupuy had six carries for 15 yards. Quarterback Zion Lewis was 7-for-17 passing for 131 yards, two touchdowns and two interceptions. Wide receiver Rah’Quan Payne, pictured on left in white jersey, had a big game offensively, despite the loss, recording four catches for 109 yards and two touchdowns. Running back Aneal Walker gave the Eagles an early 7-0 lead after returning a kickoff 80 yards for a touchdown. Senior cornerback Khalil Smith, far right in photo, stood out on defense, with six total tackles, including four solo, one pass defended and one interception. The Eagles (4-2) host Central Lunenburg High School (3-4) on Friday at 7 p.m.

Tigers hold for 21-18 win over Guilford

Hampden-Sydney College’s (H-SC) football team improved to 2-0 in the Old Dominion Athletic Conference (ODAC) on Saturday with a 21-18... read more