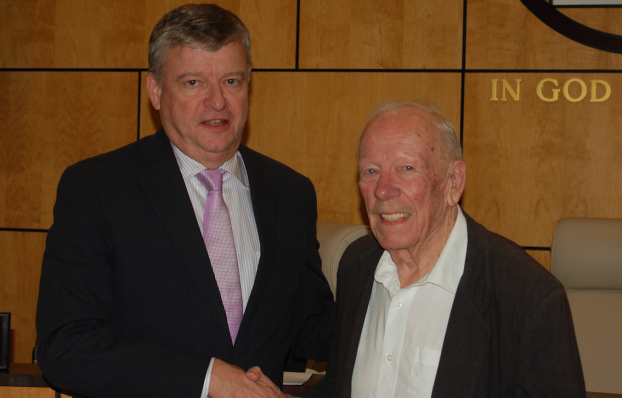 Farmville Mayor David Whitus, left, presents Dudley Sauve with a plaque with the proclamation that sets Oct. 29, 2017 to be recognized as Dudley Sauve Day in the Town of Farmville (photo by Morgan White).

Dudley Sauve was recognized during the Oct. 12 Farmville Town Council meeting for his work in community theater over the past 43 years. The proclamation set Oct. 29, 2017 as Dudley Sauve Day.

“Dudley was instrumental in working out an agreement with the town in which we acquired the old theater property, now known as Crute Stage, in exchange for the property where the Waterworks Players are currently located,” said Town Manager Gerald Spates. “If not for Dudley, we would not have Crute Stage for the public to enjoy. His contribution to the arts in Farmville is huge; and his legacy will live on through the Waterworks Players.”

The proclamation cited that Sauve founded community theater in the Town of Farmville and has since directed 175 plays.

“I think almost all plays are my favorite plays,” Sauve said when asked which one was his favorite. “…I enjoy doing it.”

“In ’72 or (‘73) — I’m not sure which of the two dates — we started the Daniel Players in Keysville and that was the beginning of the Waterworks (Players),” Sauve said.

Sauve started the Players and has directed shows for them since then.

“I didn’t want it to happen, I’m not through yet,” Sauve said regarding the proclamation. “I have no intention of quitting, it’s not a swan song. I’m going to do a show or two next season and the following season and I may be doing one when I die, I don’t know.”

Sauve said he was very pleased with the recognition from town council.

“Down deep it’s very good to be recognized, but that isn’t why I do it.”

Sauve was a professor in Longwood’s Speech and Theater Department from 1971-74. From 1974-94, he worked at Buckingham County High School as an English and drama teacher. Between 2001-04, Sauve taught drama at Nottoway High School and still substitutes at the school on occasion.

The Moton/Prince Edward County Alumni Association is more than the reunions that acted as the precipice for the organization’s establishment.... read more