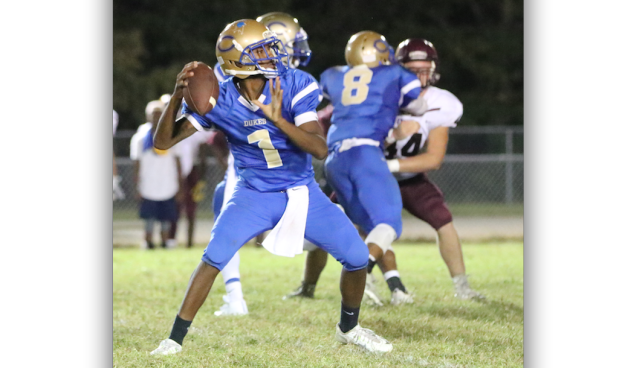 Cumberland County High School senior quarterback Darius Kyle prepares to throw against visiting Nottoway High School. Despite the Dukes’ 49-14 loss, he was 13-for-19 passing for 162 yards, one touchdown and no interceptions (photo by Titus Mohler).

Cougars pull away from Dukes

Cumberland County High School’s varsity football team set the perfect tone within the first minute of its showdown against visiting Nottoway High School on Friday night, but the rest of the game did not match it as the Cougars pulled away for a 49-14 victory.

“I’m disappointed in our defense,” Dukes Head Coach Edgar Knapp said. Referring to the lack of opponent punts, he added, “That’s the second week in a row where we didn’t force their offense off the field.”

He noted that it was not a matter of Nottoway surprising them with anything.

“It’s similar to last week with (Central) Lunenburg (High School),” he said. “We knew exactly what they were going to do. In fact, a lot of what they ran early on looked a little bit like Lunenburg’s counter trey that they run, which is good for (the Cougars). They figured out that we had a hard time stopping it, and they were just going to run it too. So, we just really have got to get better on defense. We’ve got to get the other team off the field, because we do have some weapons on offense, and we have little spurts and fits of good offensive play.”

But he said that Cumberland’s offense also failed to help the team early, incurring some penalties and committing some execution errors that forced the defense back on the field.

“There’s a disconnect there of what we do in practice to what shows up on a game, and that’s really frustrating for the kids and frustrating for us as well,” Knapp said.

The game started perfectly, though, as Dukes senior Keyshawn Diming returned the opening kickoff 75 yards for a touchdown on a play that Knapp described as “the first and last thing that kind of went exactly the way we planned it.”

The play came about from study of Nottoway’s game film.

“We noticed that they overloaded a side, so we put in a middle return this week specifically for that, and it busted the first time,” Knapp said. “Of course then they didn’t kick it to him anymore, so that was pretty smart by them.”

In one of the spurts of good offensive play, the Dukes scored on a 28-yard touchdown pass early in the fourth quarter from senior Darius Kyle to junior Ziahir Berry to make the score 49-14.

Aside from that, “we had a couple good drives today that we stalled, like, at the 20 a couple of times,” Knapp said. “So, we did some good things offensively, just not enough.”

Despite the frustrating and disappointing nature of the loss, there were still some individual standouts for Cumberland.

“We always get a lot out of Ziahir,” Knapp said. “I thought Keyshawn Diming with his return, he had a couple long passes he caught down the sideline. He had a really good night, so that was good. Darius threw the ball pretty well. … Actually, I don’t think we had too many incomplete passes. Some of them didn’t go very far, but I think we completed just about everything we threw. And we ran the ball effectively a couple different times. We just couldn’t put it together.”

Kyle went 13-for-19 passing for 162 yards, a touchdown and no interceptions, Diming had six catches for 103 yards in addition to his 75 return yards and Berry finished with two catches for 32 yards and a score.

With the loss, the Dukes reach the midpoint of the regular season with an 0-5 record.

“We’re really at a level of frustration right now with trying to get things to where we’re not hurting ourselves, and that’s really kind of where we are right now,” Knapp said. “So, as a staff, this weekend we’re going to have to do some soul searching about our defense.”

In the latter half of the season, Cumberland is set to visit Goochland High School, renew its rivalry with Buckingham County High School at home, visit Chatham and Bluestone high schools and host Randolph-Henry High School.

“We’ve got our work cut out for us,” Knapp said. “The first half of the season has not turned out the way we anticipated it was going to, and a lot of it has been self-inflicted. So, we’ve really got to fix that.”

The varsity golf teams for Buckingham County and Prince Edward County high schools did not produce any state-qualifying individual or... read more