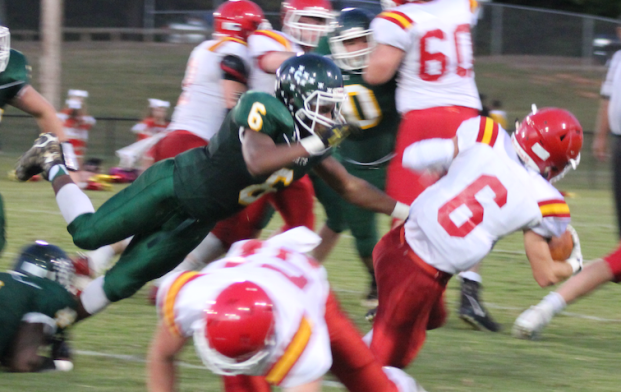 Strong defense helped keep Buckingham County High School’s varsity football team in the game against undefeated visitor Goochland High School on Friday night, but the Knights’ offense and special teams struggled, and the Bulldogs pulled away for a 24-7 victory.

“We’ve been able to play good defense, but we’ve just got to able to pick it up offensively,” Buckingham Head Coach Josh Wallace said. “We keep shooting ourselves in the foot,” later adding that the Knights also gave up 10 points on special teams.

Goochland held a narrow 7-0 lead with four minutes remaining in the first half when Buckingham punted from its own 30-yard line. The punt went awry, and the ball ended up traveling minus one yard.

A pass play set the Bulldogs up to score on a short run and go up 14-0.

The Knights turned the ball over via an interception about a minute later, and the Bulldogs were able to go up 17-0 before halftime.

“At least we held them to a field goal,” Wallace said.

Buckingham’s offense started the second half strong but could not turn its effort into points.

“We marched all the way down to their two-yard line (but) couldn’t get anything out of it,” Wallace said. “So then we ended up going for a field goal ourselves, and then they block it.”

Despite the loss, Wallace was pleased with his team’s resilience against Goochland, which is now 5-0.

The Knights’ defense held the Bulldogs’ offense scoreless in the second half, as the visitors’ final touchdown came on a return of a blocked Buckingham punt.

“Quantarius Stanton did a pretty good job defensively at linebacker,” Wallace said of the Knights junior.

Buckingham (1-5) has a bye this week and will aim to prep a late-season push.

Dukes start sharp, but then Nottoway pulls away to win big