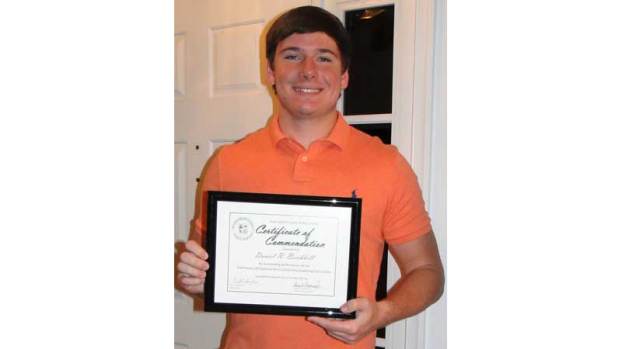 Buckingham County High School senior Daniel Brickhill holds the Certificate of Commendation from Buckingham County Public Schools that was presented to him for his outstanding performance on the 2016 Preliminary SAT, which was also his National Merit Scholarship Qualifying Test.

Buckingham County High School (BCHS) senior Daniel Brickhill was recognized at the Oct. 11 meeting of the Buckingham County School Board for being named a Commended Student in the 2018 National Merit Scholarship Program, according to school officials.

A school press release further stated that BCHS Principal Rudolph Roethel presented Brickhill with a letter of commendation from the school and the National Merit Scholarship Corporation, which conducts the program.

Giving an idea of the level of Brickhill’s achievement, school officials said in the release, “About 34,000 Commended Students throughout the nation are being recognized for their exceptional academic promise. Although they will not continue in the 2018 competition for National Merit Scholarship awards, Commended Students placed among the top 50,000 scorers of more than 1.6 million students who entered the 2018 competition by taking the 2016 Preliminary SAT/National Merit Scholarship Qualifying Test (PSAT/NMSQT).”

Brickhill said his initial reaction to the Oct. 11 recognition was complete surprise.

“Mr. Roethel had told me that I needed to report to the school board meeting, and I had no idea what to expect,” he said. “And I walked in, and he was sitting on the front row, and my mom was in there. I was like, ‘Wait, what’s going on?’”

He noted that as it was explained to him and as Roethel began his presentation to the board, it was an honor to be able to represent Buckingham in this way.

Roethel said he is quite proud of Brickhill.

Roethel noted that the honor is hopefully the first of many to come for Buckingham students as he and his staff are seeing a rise in SAT scores.

Brickhill’s drive will soon be taking him to the next level of education.

“In some way or form I want to study government and commerce and mix some business in there,” he said.

What college he attends is still to be determined.

“I’ve sent out all my applications, but it’ll be, I think, until December until I start hearing back from schools,” he said.

He noted that he did not advance far enough to get any scholarship money, in the competition for National Merit Scholarship awards but the Commended Student honor could definitely afford him an advantage in the admission process.

How many acts of kindness can your community do? This is the sentiment Cumberland County Elementary School (CCES) is attempting... read more