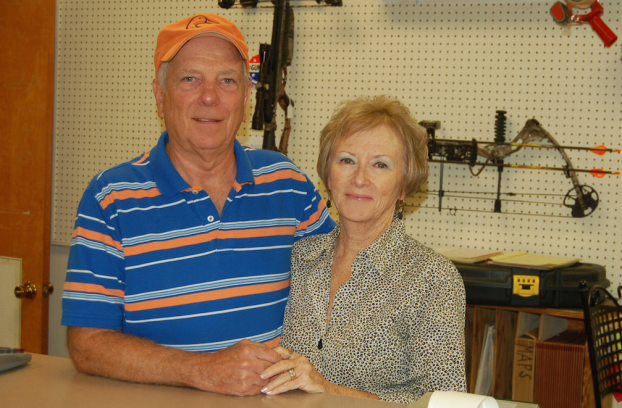 Lynn, left, and Beverly Ayers stand behind the counter at Ayers Building and Supply, a family business that’s set to close Thursday.

Ayers Building and Supply Co. Inc. is set to close its doors Thursday.

Co-owner Beverly Ayers said it would be the last day of payroll but that it was possible there could be a big sale the following day.

“I’m going to miss the public — serving the public. As far as memories there’s so many, I can’t go over them all,” co-owner Lynn Ayers, Beverly’s husband, said. “There’s so many funny instances that happened to us since we’ve been open.”

Lynn said what he misses most about the business is his mother and father, who started the company in 1948.

“They started this company and, you know, they’d been in it their whole lifetime and dedicated their whole life to it, and I came in on 1971 and started with them and it’s just fantastic to feel what you feel when you create a home for someone and when we were doing construction,” Lynn said.

“It was just the greatest feeling that you’ll ever have knowing that you’ve satisfied someone with a new home.”

He said they always worked to provide a quality product without cutting any corners, building other’s homes “just like we build our own home.”

He cited that Ayers Building and Supply has always had a friendly competition with Cumberland Building Supply and Keysville Building Supply, noting that if one of them were ever out of something the businesses would help each other.

“(We’ve enjoyed) just great relationships with the other building supplies around,” Lynn said. “But mainly it’s the people I’m going to miss. We just have so much appreciation for all the customers we’ve had over the years.”

Lynn said the store is liquidating through Thursday.

“We’re trying not to refuse any legitimate offer, you know, a reasonable offer. Come in and we will (bargain) a little bit on any price we have, but as long as it’s a reasonable offer, we won’t refuse it,” Lynn said.”

Farmville Sporting Goods, which is currently operated in the same building as Ayers’ at 710 N. Main St. in Farmville, is run by Ayers co-owners Beverly and Lynn’s son Scott and will remain open in the space.

Lynn said Scott would continue operating his business in the building. Beverly and Lynn said they’re not sure what they’ll do with the building in the long term future.

“Whether we rent or sell, we’re not sure, but Scott will be continuing with his guns and ammo and sporting goods. If it’s not here it’ll be somewhere else,” Lynn said.

“We have three children,” Beverly said in a previous interview. “Two of them are already working somewhere else in careers of their own, and Scott is working here. He’s our eldest son, and he’s been here since he was 15 (years old) working in the summers.”

She said Scott had been building houses before he came and worked in the store.

“That’s not what he wants; he wants to run a gun shop,” Beverly said. “So for the past six or seven years, we’ve been selling guns, and he’s just done wonderful with the guns and he loves it.”

She said Bruce Dunn, Lynn’s brother-in-law, who is part owner, retired and that his children have careers of their own as well.

She said, unlike the past, the business hasn’t built houses for a couple years.

“…Lynn’s father and his grandfather were builders … in Virginia Beach during World War II,” Beverly said. “When they came back here, they said they were still going to build, and his mother said, ‘Well, I want a building supply.’”

Beverly said the store was small until they moved to the current space on North Main Street in about 1971.

She said the business has sold all types of building supplies “from A to Z,” including lumber, blocks, brick, molding, windows, doors, shingles and metal roofing.

“In the showroom, we’ve sold all types of hardware,” Beverly said.

Town Manager Gerald Spates says the recent decision to seek an outside consultant to review and amend the town’s comprehensive... read more