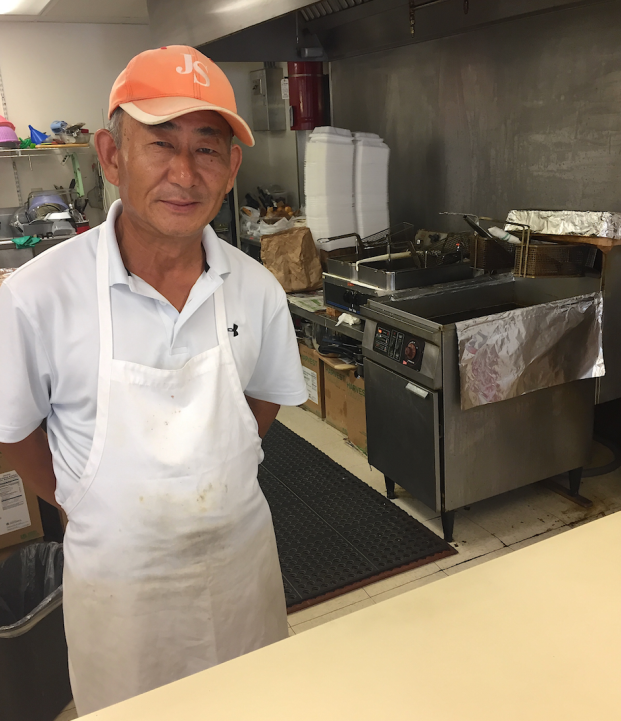 Mun Cho stands in the kitchen of his restaurant, Joe’s Seafood.

The Bonus Life of Mun Cho of Joe’s Seafood

When Mun Cho (Joe) came back to work at Joe’s Seafood five days after having had an operation for stomach cancer two years ago, his friends asked him, “Are you some kind of superhero? You need to stay in bed and rest.”

He told them simply, “I have to work. I have to support my family.”

He’s been doing those six work days a week, 10 or more hours a day since he came from his native South Korea to this country in 1977. With only his wife as a fellow worker, he has operated his fresh seafood business in Farmville. Before that he held a variety of jobs in New York, Missouri, Georgia and Richmond.

“My family lived on the land,” Joe explains, recalling his childhood years in South Korea. He ran a laundry mat in Richmond but wanted to live in a place that reminded him of his home.

“I like the countryside,” he admitted. Then he smiled and added, “Nicer people than in the city.”

This Southside community helped him get started, and now word of mouth keeps customers coming.

“It’s hard, though,” he explained. “I won’t get rich, taxes are high, but have a lot of friends—good friends here.”

Rising daily at 6 a.m., he’s on the road getting his product before arriving in Farmville around 10 a.m.

“People don’t know. To get good seafood, I have to drive to Virginia Beach, to the Eastern Shore — wherever the fish are.”

Over the years he has established contacts throughout eastern Virginia and North Carolina. He works until at least 6 p.m.

Despite his many abilities, Joe could not escape poverty in his native country.

“I played soccer, was good,” he said. “I tried out for the German national team, but injuries… “ He pointed to a scar about sixteen inches long on his knee.

He was also a professional golfer, but at a time when it was hard to find sponsors. He has given lessons and continues to play. Every year for a decade Joe’s Seafood has sponsored a golf tournament — 4-Man Captain’s Choice — at the Farmville Municipal Golf Course.

Providing fresh seafood, he says, is “a risky business.” Most people don’t understand the factors that affect supply — the weather, the competition from restaurant and grocery store chains, the seasons. That’s why it’s hard to save for retirement.

He and his wife of 42 years have three grown children, who are all successful. Joe feels he must continue to take care of family.

“No choice — have to work for a few more years.”

Because of the intense labor necessary to prepare fish for sale, he has developed arthritis in his hands and suffered from carpel tunnel syndrome. He also lifts and carries heavy crates from supplier to truck to store. He lost 70 percent of his stomach to cancer.

Talking about his long journey, he wipes his eyes because of the heat, but also because of his strong feelings.

This country, he says, has given him a second chance to live and have a family.