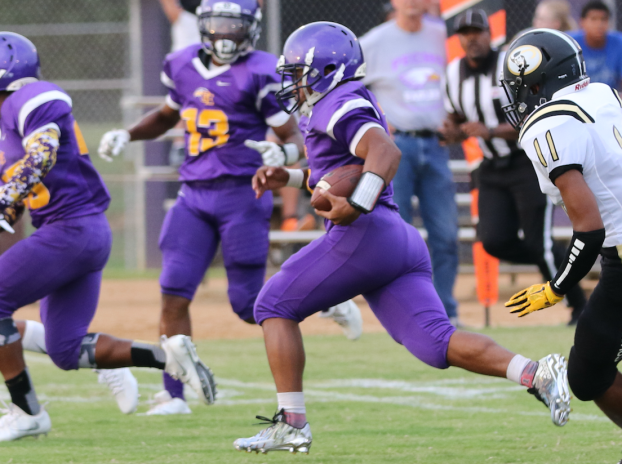 Similar to their season-opening home win against King William High School, the Eagles improved as the game went on. The Colonels led 15-12 at halftime, but then the Eagles outscored them 20-0 in the third quarter and held on in the fourth for a 32-27 victory.

“I feel pleased,” Prince Edward Head Coach James Ford said. “Again, just like King William, (I’m) just very pleased with how we came out. (The Colonels) were able to take the lead early, but we were able to put together a really good third quarter, shut them out in the third quarter and just rode that to the win. So, I was really pleased with our effort.”

Altavista has a recent history of significant success, having won the Virginia High School League (VHSL) Group A state championship in 2013 and the VHSL Group 1A state title in 2014.

As for what gave Prince Edward the edge over the Colonels, Ford noted his team was able to run the ball.

The Eagles offense generated 389 yards and four touchdowns through its run game. Leading the way was Rahme Marshall, who had 19 carries for 164 yards and two scores. Zion Lewis gained 98 yards and a touchdown on eight carries, Jarrell Robinson recorded 10 carries for 55 yards and a score, Rah’Quan Payne added two carries for 46 yards and J’Sean Dupuy carried the ball seven times for 26 yards.

The coach made a point to emphasize the offensive line’s stellar work, even without injured tackle Deante Trent.

“With Deante out, we have to mix and match,” Ford said. “But this week, it was Jarmal Joyner at center, the guards were James Morgan and Alex Hardy, Ian Watson at tackle and Markus Seward at the other tackle.”

Seward was the replacement for Trent.

Altavista opened a 6-0 lead after a 57-yard touchdown run in the first quarter. Lewis made it a 6-6 tie via a 60-yard scoring run before the quarter was over.

The Colonels inched ahead of the Eagles on the scoreboard, 8-6, in the second quarter after a backwards Prince Edward pass out of the end zone resulted in a safety. Altavista grabbed its biggest lead of the ballgame, 15-6, after an 11-yard touchdown run.

On the ensuing kickoff, the Eagles’ Aneal Walker helped make the halftime score 15-12 after he scored on an 85-yard return.

In Prince Edward’s’ big third quarter, Marshall reached the end zone on runs of 15 and 49 yards. Robinson’s 10-yard touchdown run made the score 32-15.

Altavista came back in the fourth via a 43-yard scoring run and a touchdown reception but could not get the go-ahead score.

On defense, Morgan led the Eagles with 15 total tackles, 12 of which were solo. He had four tackles for loss.

“James Morgan had a standout game offensively and defensively,” Ford said, noting he played offensive guard and defensive tackle. “The kid came to play, and he played really well.”

In addition to a collection of tackles, Chris Campbell and Kahare Sutton each had a sack, and Robinson had a forced fumble.

This is the first time Prince Edward has started the season 2-0 since 2007, when it opened with wins over Fluvanna County, Randolph-Henry and Buckingham County high schools.

He highlighted the importance of focusing on one game at a time and trying to go 1-0 each week.

Adaptability on the court

A young Fuqua School varsity girls volleyball team is looking to develop quickly in 2017 as it presses on without... read more