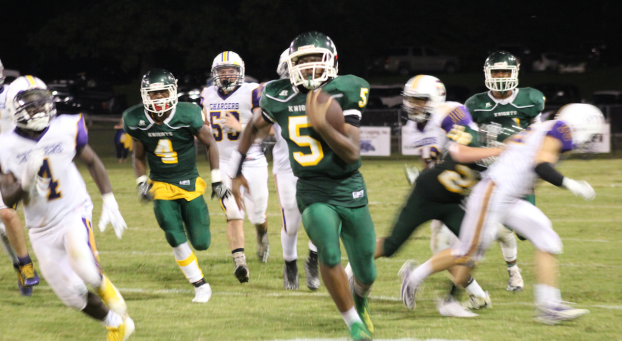 Knights come back for first win of the year

After trailing for most of its game Friday night, Buckingham County High School’s varsity football team persevered, fighting its way back against visiting Central Lunenburg High School to claim its first win of the season, 26-21.

“We just kept fighting, and I’m proud of them for not giving up,” Knights Head Coach Josh Wallace said of his players.

Though Central took a 6-0 lead, Buckingham pulled ahead 7-6 after senior quarterback Daniel Brickhill scored on a three-yard run with seven minutes and six seconds left to play in the second quarter. The Knights held that advantage until the final minute of the first half when the Knights handed the Chargers a golden opportunity.

“We went to punt the ball, we bobbled it, panicked, tried to run it for a first down instead of just punting it out, giving us time,” Wallace said. “And they got the ball, and they score on the easy pass, and then they got the two-point conversion…”

“So, we could have easily folded,” Wallace said. “Some of our coaches got fired up at halftime and challenged our guys, and they responded. They didn’t shut down, and I’m very proud of them for that.”

The coach said he and his staff made a couple of adjustments at that point of the game, but nothing huge.

“We game planned for (the Chargers), and they run a couple different things defensively we had prepared for,” Wallace said. “Our guys did a good job preparing for them, and we came out, just kept grinding, kept working and believed that it was going to work.”

That faith was tested further in the second half when Central went up 21-7 after an approximately 60-yard touchdown run.

But then Buckingham began its comeback, scoring 19 unanswered points.

Sophomore running back Walter Edwards ran for a five-yard touchdown with 5:16 left in the third quarter to help make the score 21-14.

With 8:43 to go in the fourth quarter, freshman quarterback Gerry Toney reached the end zone at the end of a 55-yard touchdown run, making the score 21-20, but the Knights missed the crucial extra point, leaving them behind by one. But they pressed on.

“And then we stopped them on defense, and they punted the ball back, and we ended up marching it down,” Wallace said.

Edwards scored the game-winning touchdown on a 25-yard run,

Helping make the comeback possible was  a strong performance by the Buckingham defense, including senior linemen Nicholas Hartwell, Brandon Moseley and Brycen Newby.

The Knights improve to 1-3 as they near the midpoint of the regular season.

“It always a good thing to win,” Wallace said, adding that in addressing his players, “I told them to enjoy it, but at the same time, I told them, ‘Hey, we have not arrived by any means. That’s only one game. We have a lot of games left to play. It don’t matter what our record is. It doesn’t matter what anybody else’s record is — we’re going to take it one game at a time…’”

Longwood University men’s basketball coach Jayson Gee and his family will share their testimony of faith and family unity in... read more