History lies under the bridge

The original High Bridge — once simply a bed of railroad tracks spanning across the Appomattox River — was burned by Confederate forces during the American Civil War attempting to flee Union soldiers.

According to Virginia Department of Conservation and Recreation Education Specialist Bob Flippen, Union soldiers were able to cross the Appomattox River on a wagon bridge that laid closer to the ground, inevitably leading to Gen. Robert E. Lee’s surrender at the Appomattox Courthouse. 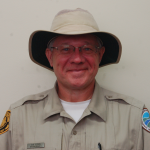 The steel bridge, which the current bridge sits atop, was erected during a 15-month time period between 1913-14.

“It took 13 months to build up the earth and approaches on each end. The Prince Edward side was 400 feet (tall), the Cumberland side was 1,800 feet (tall),” Flippen said.

According to Flippen, traffic was diverted from the old bridge to the new bridge on June 22, 1914. Tours and other events at the High Bridge Trail State Park occur frequently. For more information regarding tours and other events, visit http://www.dcr.virginia.gov/state-parks/high-bridge-trail.