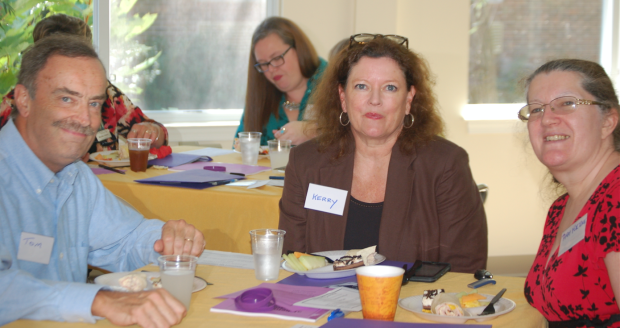 Helping those with Alzheimer’s

Being affected by Alzheimer’s Disease or caring for a loved one with the disease can be an isolating and daunting experience. Leaders and health care professionals in the Heart of Virginia are seeking to help.

About 20 people gathered in Farmville to discuss pooling greater resources for people with Alzheimer’s Disease and their families Sept. 7.

The lunch meeting, held at The Woodland, included health care professionals from Farmville and Buckingham, members of the faith community and representatives of the Southeastern Chapter of Alzheimer’s Association.

During the meeting, participants from each table discussed their experience and interest in serving those with Alzheimer’s, exchanged information and offered input on discussions led by Alzheimer’s Association representatives.

Following the meeting, the association representatives held a public meeting discussing basic information relating to Alzheimer’s Disease and its care.

Marion Kyner, a psychiatric clinical nurse specialist with The Woodland and organizer of an Alzheimer’s caregiver support group that meets once each month in Farmville with the Rev. Roland Grenouillou, said the aim of the event was to bring additional awareness and resources for people in the area affected by Alzheimer’s.

“It tells me that we’re not alone,” Kyner said, addressing the audience at the lunch meeting. “I’m really glad to have you all here.”

She said while the support group, which meets the first Thursday of every month at Brookview at The Woodland from 2-3 p.m., has been helpful to families it is not enough to meet the needs of families or those directly affected.

According to statistics from the Alzheimer’s Association, an organization that advocates for research and resources for Alzheimer’s Disease and dementia on the local, state and national levels, Alzheimer’s is the sixth-leading cause of death in the U.S.

Kyner said the disease can affect both older and younger people, noting her best friend was diagnosed with the disease in her 50s.

She said she knew families who had to move away from Farmville because resources for Alzheimer’s patients were lacking.

“We need to fight this disease,” Kyner said.

“The nation has a plan. The state has a plan. Farmville needs to have a plan,” Kyner said.

Katie McDonough, director of programs and public policy for the Southeastern Virginia Chapter of the Alzheimer’s Association, said the chapter is working to pool additional resources that families can use in Farmville, whether that be dementia care training or highlighting local organizations that provide in-home care with certified nurses or nursing assistants.

“We want people to leave this lunch with a couple of tangible next steps,” McDonough said.

Participants at the meeting noted the high population of elderly people in the community who could benefit from the resources.

One action being developed by the association is compiling organizations supporting people with Alzheimer’s and their families in Farmville for a resource manual. The manuals could be available as a hard copy or as a community resource finder, which can be found online.

The association offered training materials that could be used in community organizations and places of worship.

Additional information about the efforts can be obtained by contacting Kyner at (434) 392-6106 or learning more about the Alzheimer’s Association at www.alz.org.

A Walk to End Alzheimer’s event, taking place at Longwood University, is scheduled for October.

Cindy Morris, the Town of Farmville’s planner, will soon resign her post. Cindy Morris She said her last day with... read more