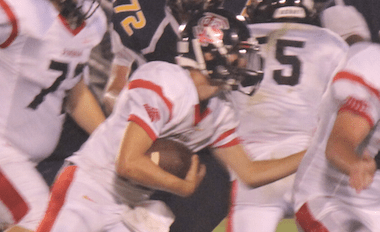 Falcons Head Coach Ben Manis simply said, “I think we’re a better team all the way around than they were.”

He acknowledged that the Navigators have some good athletes, but they did not come together as a team that significantly challenged Fuqua.

Strong team play for the Falcons helped result in a standout night for Ben Bailey.

“Ben Bailey had a very good night offensively,” Manis said, as the senior recorded 18 carries for 274 yards and five touchdowns in addition to a 72-yard touchdown catch.

Sophomore Elijah Warner got Fuqua on the scoreboard with a 15-yard scoring run. Then Bailey began to rack up points.

He scored his first touchdown on the long pass from Warner. The next time the Falcons reached the end zone, it was on an 11-yard run by Bailey. He went on to score on an eight-yard run as well as a pair of 58-yard runs. His next score was his longest of the night, and it came on a fake punt.

“We kind of give the kids leeway to call it if they see it,” Manis said in regard to faking a punt.

Bailey took the direct snap and carried it 75 yards for a touchdown.

Senior Billy French, Fuqua’s standout linebacker/quarterback who has been limited with a stress fracture, saw some more playing time Friday.

“We really kind of limited him because we didn’t think that we really needed him for this, so he got some snaps, but he did not get very many,” Manis said. “… We’ll probably take the bubble wrap up off of him this week, because I think he’s ready to go.”

French finished Friday with 11 carries for 75 yards, including a two-yard touchdown run.

Manis is pleased to see his team at 3-1 after opening the year with a 33-19 home loss to Fredericksburg Christian School.

“Our kids are playing increasingly better each week and probably getting exponentially better than we have in the past, from week to week,” he said.

In their three wins, the Falcons have averaged 50 points and have won by an average of 28.7 points.