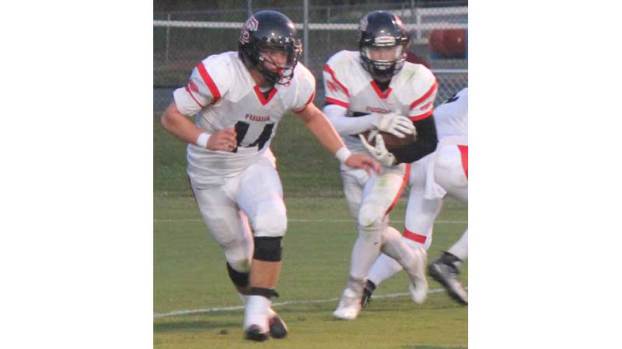 Falcons more than up to the challenge

Blessed Sacrament Huguenot (BSH) Catholic School’s varsity football team wanted the challenge of taking on Fuqua School on Friday, and the Knights put up a good fight, but they could not take down the Falcons.

Fuqua led 20-18 at halftime in Powhatan and pulled away in the second half for a 56-32 victory.

“We started out slow,” Falcons Head Coach Ben Manis said, acknowledging that this status was due, in part, to coming off a season-opening loss Aug. 25 and then having a bye last week. “We had some mistakes earlier in the game. We cleaned them up at halftime.”

He noted that based on his observations, the Knights had been thinking about Fuqua even before they played and defeated Broadwater Academy in their opener Sept. 1.

“They were trying to figure out a way to beat us for the past three weeks or whatever, so it’s just one of those things that they gave it their best shot,” he said, praising the Knights for playing smart football and for saddling the Falcons with poor field position more than once during the game. “We just got a chance to overtake them.”

Manis said BSH Catholic did everything it could to stop certain parts of Fuqua’s offense, but in doing so, it created opportunities for the Falcons to gain yards elsewhere on the field.

“They (were) trying to stop off-tackle so much, they gave us the edge,” he said of the Knights. “And then they were trying to stop the run so hard, they were blitzing every gap. And so we hit them with a couple of screens that really slowed them down.”

For the game, senior Ben Bailey led the Falcons with 18 carries for 209 yards, two touchdowns, and he also had a two-point conversion. Sophomore Elijah Warner went 3-for-7 passing for 82 yards and a touchdown, and he also ran for a score.

Senior Billy French returned from a stress fracture, seeing his first action this season, and he ran seven times for 98 yards and two touchdowns along with going 3-for-3 passing for 25 yards.

“He was really the spark before halftime that got us going,” Manis said.

Junior Christian Adams had four carries for 42 yards and two catches for 44 yards.

The Fuqua defense was also effective against the Knights.

“I think, at halftime, they had something like 25 … or 15 yards rushing against us,” Manis said of the Knights.

Bailey recorded eight tackles, including two assisted tackles, and one interception, Thomas had three interceptions, including one that he returned for a touchdown, and senior Warren Dabney recovered a fumble and returned it for a score.

The Falcons (1-1) host Atlantic Shores Christian School on Friday at 7 p.m., which will be the 40th Reunion Game for Fuqua’s Class of 1978.

Eagles pull away to top Dukes