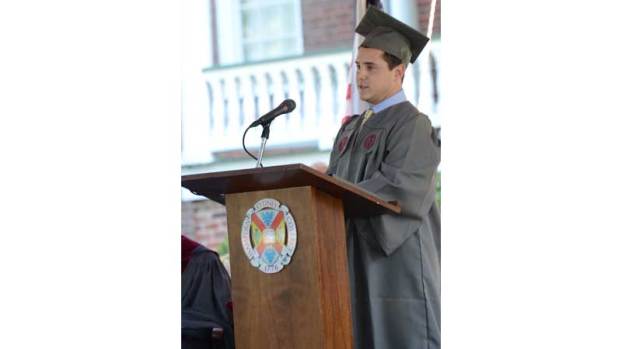 Hampden-Sydney College’s (H-SC) Opening Convocation celebrated academic excellence and the beginning of the 2017-18 academic year during a ceremony that took place on the lawn of Venable Hall in August.

H-SC President Dr. Larry Stimpert offered a convocation address in which he emphasized the importance of high expectations about Hampden-Sydney’s potential.

“Our mission ‘to form good men and good citizens’ is more vital, more important and more relevant than at any time in this college’s or this country’s history,” he said. “We offer students an amazing educational experience. We are strong financially. We have just completed a terrific recruiting year. We surpassed our fundraising goals for the past year, and we have ambitious, achievable fundraising goals for the future. We must have high expectations for the college and for everything we do here. And we must meet those high expectations because we are unwilling to accept anything less.”

Stimpert also discussed H-SC’s unique culture and the importance of ensuring that the “daily lived experience” of Hampden-Sydney men truly reflects the college’s mission and the codes of honor and conduct that guide student life. He called on the entire community to help the freshmen become engaged and connected.

“A student cannot thrive unless he feels he belongs and that he is engaged,” Stimpert said. “So, let us all do what we can to help the newest members of our community feel that they belong here. And let us all help them learn our tradition of looking everyone you meet in the eye and saying ‘hello.’”

In addition to Stimpert, senior Sam Murphy, president of the student government, and senior Steven Dvornick also offered remarks to the assembled students, faculty and staff.

Following the inauguration of student government officers and prior to Stimpert’s address, college officials presented a number of awards to students in recognition of academic and extracurricular excellence.

• Senior Steven A. Dvornick received the President’s Award for Academic Excellence in Humanities.

• Sophomore Dylan F. Cate received the Omicron Delta Kappa Award, given to a member of the sophomore class who demonstrated real leadership potential during his freshman year.