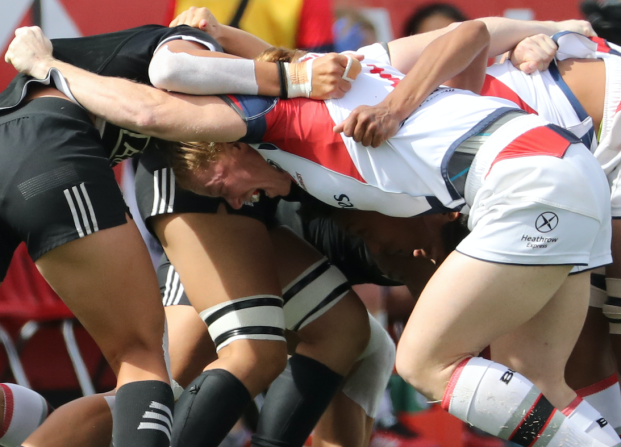 Pankey, U.S. to play for bronze

Buckingham native Samantha Pankey and the rest of the U.S. national women’s rugby team have shown that they can challenge the world’s best at the 2017 Women’s Rugby World Cup in Ireland. And though they did not reach the final, they will play for third place Saturday in Belfast.

The U.S. squad, also known as the Women’s Eagles, went 2-1 in pool play in Dublin before advancing to the semifinals in Belfast. Pankey said the team played great, though there was room for improvement at times.

“We did what we wanted and earned our place in the semis through getting bonus points in each of our three matches, including the one we lost,” she said.

The Women’s Eagles opened their play in the World Cup Aug. 9 by defeating Italy 24-12.

Then in the match to decide who would win Pool B, the Women’s Eagles fell 47-26 to defending champion England on Aug. 17.

But with 11 points accumulated, the U.S. was the strongest runner-up out of the three pools, advancing it to the semifinal round with England, four-time champion New Zealand and France.

Pankey was pleased with her own play overall.

“I would’ve liked to have been out there more, but I feel that I made an impact when I was in,” she said.

She played 20 out of 80 minutes in the match against Italy, coming off the bench. Against Spain, she started and played 75 minutes, and against England, she came off the bench to play 19 minutes.

Pankey noted that from the start, the U.S. coach has said the team has two starting players at her position, and Pankey is included in that pair.

“With that said he also likes me coming off the bench as a spark,” Pankey said. “I’m comfortable in both roles, but of course the competitor in me wants to see the field as much as possible.”

In match against Spain when she had the most playing time, she recorded six tackles.

She said it is hard to say which match was her team’s best.

“The Spain match was our best defensive match, but the second half of the England match we played at a pace that was equal to men’s international matches (according to England’s GPS monitors),” she said.

England uses technology to measure the performance of rugby players in great detail.

On Tuesday, the Women’s Eagles faced New Zealand in the semifinals and provided a stiff test for the world’s top-ranked team before ultimately falling 45-12.

Pankey came on the pitch as a substitute in that contest, logging 11 minutes.

“Against New Zealand we proved that we can compete against the best in the world,” Pankey said. “However, we also showed our lack of consistency. Some would attribute the point differential in the second half to New Zealand’s ability to adapt. I think it had more to do with the place we’re in as a team. We’re just not seasoned enough to maintain that consistent, hard-nosed, driven play, and unfortunately we let ourselves down.”

Later, in Tuesday’s other semifinal, England defeated France 20-3, setting up the Bronze Final between the U.S. and France on Saturday, with kickoff scheduled for noon EST.

“The match against France is going to be a bar fight,” Pankey said. “They’re a physical team, and so are we. But we have more speed on the ends, and if we can withstand their pressure and play fast, it will be hard for them to keep up.”