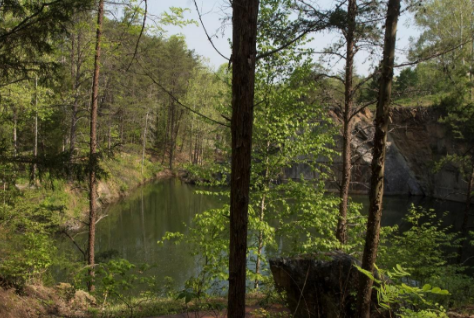 One of the abandoned soapstone quarries is now filled with water.

Some people retire and are quite content to do nothing. Others are constantly looking for new projects and challenges. Imagine deciding to abandon city living for life in the country. Imagine purchasing 400 acres of land complete with six abandoned soapstone quarries that have been used as a local landfill. Imagine waking up one day and realizing that you’ve purchased a rather unique property and that perhaps you should share it with others. I met such a couple earlier this summer. They’re the creators of Virginia’s newest botanical garden, the Quarry Gardens at Schuyler.

Bernice and Armand Thieblot abandoned city life in Baltimore for a different pace in Schuyler. After purchasing land in Schuyler, they spent a number of years cleaning out the quarries and researching the history of the soapstone industry in Virginia. There was a time when every home had a soapstone sink in the laundry room and the quarries at Schuyler were very busy. And then other materials replaced soapstone, and the quarries were abandoned. 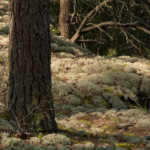 They also began to learn more about the ecosystem of their property and found that it’s unique for the area. Because of the soapstone dust in the soil, it has a very high pH — 7 to 8.2 and thus has an interesting mix of plants. They hired experts to identify the naturally occurring plant communities found on their property and ultimately decided to restore some areas and to protect other areas.

Last year they added more than 40,000 plants to the property. They also cut trails, built a road and added a center where visitors can learn about the soapstone industry and the ecology of the area.

The Quarry Gardens at Schuyler opened to the public this May. The interesting native plants that you’ll see. There are many of the typical plants that you’ll find in most wooded areas in central Virginia — foam flower, heuchera, skunk cabbage, hepatica, sundrops, pasture roses, autumn coralroot, a parasitic orchid and pussy toes. But there are also some surprises: native prickly pear cactus, devil’s walking stick, a native stonecrop and quill fameflower, a small unassuming member of the Purslane family that blooms around 4 p.m. and closes before sunset. The small rose-colored flowers only last a few hours.

There are beautiful umbrella magnolias that bloom in May and even American hollies. How can these acid-loving trees survive the highly alkaline soil? The experts aren’t certain, but the hollies may have adapted by remaining very small and by taking advantage of the extra magnesium in the soil.

The Quarry Gardens at Schuyler aren’t flashy. They’re meant for contemplative walks in the woods and for learning about nature. Plans for new areas include demonstration gardens so that visitors can see how to incorporate native plants into their existing home gardens and a propagation area for native plants.

The gardens are open by appointment, and admission is free. Guided tours generally last two hours. It’s amazing what can be accomplished with vision and imagination. Who knew that a retirement project would become so large or offer so much to the public?

Church and Community Events for the week of Jan. 13

Church and Community Events for the week of Jan. 7

Church and Community events for the week of Dec. 24