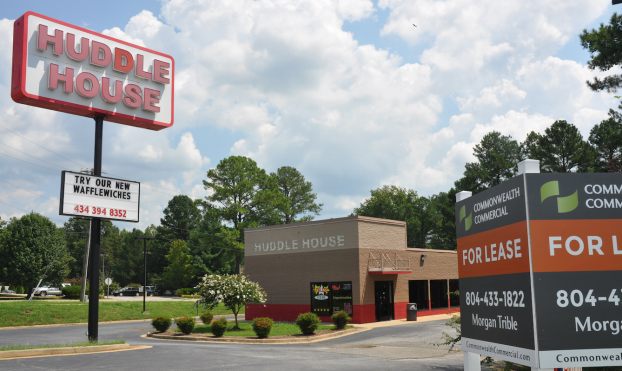 Though the “For Lease” sign still stands at the shuttered Huddle House, remodeling and construction at Farmville’s soon-to-be open restaurant is set to begin in the coming weeks (photo by Jordan Miles).

Q: I still see the “For Lease” sign on the property at the vacant Huddle House. Is it still going to be reopened?

Though its originally projected opening date of Aug. 1 has come and gone, the new owners of Huddle House, located on South Main Street in Farmville across from Walmart, remain steadfast in opening the doors to the restaurant soon.

According to Stephanie Taylor Blake, a spokeswoman for the new owners, “they’re anticipating remodel construction to begin in September after Labor Day, however, this may change.”

Months ago, brothers Dev and Shiv Patel announced the intentions to open Huddle House — bringing with it 40 new jobs to the community.

According to a press release, “the iconic neighborhood gathering place known for its round-the-clock breakfast, Southern hospitality and big portions at fair prices announced it has signed an agreement with (the Patels) to open a Huddle House in Farmville.”

“It’s up to 40 staff total,” said Shiv Patel during a prior interview. “And that would break out to about 20 part-time and 20 full-time (jobs) … That’s what we’re projecting.”

“They will be remodeling the location to reflect the same new design as the South Boston location,” Blake said. “Exterior and interior finishes will be updated, including the addition of the tower element, new signage, stucco and paint, padded seating, all new interior décor and equipment.”

“They’re still finalizing the paperwork but we’re anticipating construction to begin in the next month or two,” she added.

Regarding the “For Lease” sign on the property, Blake said “the landlord simply has not removed the sign; it will come down once construction begins.”

“We’re definitely very excited about opening this additional Huddle House location,” Shiv said previously. “So, we’re new to the Huddle House brand, but we’re going to be opening four locations this year. Specifically, in Farmville, I’d say we’re very excited because we get to serve a different kind of market than what we’re serving in our other locations — a lot younger crowd, a lot of college kids. And I think one of the things we’re looking forward to the most is … a good sense of community from us. We’re going to be involved in a lot of activities, which we’re not sure what they are yet, but as we get closer to opening, we look forward to reaching out to groups and seeing how we can get involved in the community and help make Farmville a better place to work and live.”

“So, it’s going to look brand new on the outside and inside. It’ll look very fresh. The old look was kind of dated … We’re going to make it look brand new.”

The former owners of the Huddle House restaurant on South Main Street closed the business in 2015. The restaurant was one of several at the center of a bankruptcy trial for the former franchisee who operated it and several others throughout Central Virginia.

Through telescopes scattered across the grass and special glasses distributed to students, staff and members of the community, a large... read more