The July meeting of Redbud Garden Club was held July 27 at the Barbara Rose Johns  Farmville-Prince Edward Community Library. According to a press release, Janet Higgins and Patsy Miessler were hostesses. 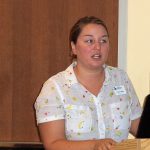 “She encouraged members to donate their extra garden produce to FACES Food Pantry or ‘Grow a Row’ so that extra vegetables can be given to those on a small, limited budget,” officials said in a press release.

The Word: You’re never too old to serve

I went to Centra PACE in Farmville on Aug. 24 for its annual Senior Prom, which is literally a prom for... read more