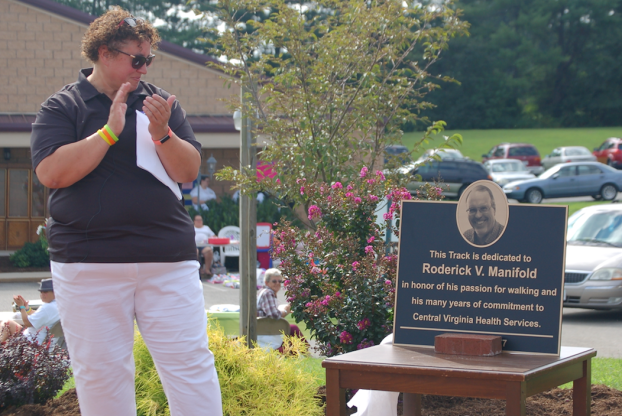 Members of the community, Central Virginia Health Services (CVHS) leadership and family and friends of the late Roderick Manifold attended a 5K walk/run and yard sale event in New Canton on Saturday to celebrate his life and legacy.

The center’s outdoor track was dedicated to Manifold during a ceremony that coincided with Health Center Week, which took place in mid-August.

The group “The Odyssey of Soul” also performed. Manifold’s daughter, Nadia Manifold Anderson, is a member of the group.

Wetherhorn, a health care consultant and advocate, noted that Manifold’s legacy extends beyond the New Canton health center location, noting Manifold played a crucial role in preserving health care centers in Virginia in the late 90s to the early 2000s.

Tomko struggled to speak at times as she recalled Manifold’s drive to make sure health care was accessible to everyone.

She shared memories and quirks and said he would often write notes on small pieces of paper, that he would wait in line with the customers at the center’s pharmacy and that there was no such thing as a “brief conversation” with Manifold.

“I can honestly say I never had an interview where there was actually bathroom breaks,” Tomko said as people laughed.

Tomko remembered Manifold’s encouragement and his ability to bring out the best in people.

“The feeling of respect and love he had for the staff that did what they do was just palpable,” Tomko said, saying that Manifold considered the staff at CVHS above himself and other executives. “That’s the man we honor today.”

Tomko said the event was difficult to organize because the staff knew how much Manifold would have enjoyed it.

Anderson also spoke during the dedication, thanking the audience for remembering her father.

“He loved this place,” Anderson said, adding that she and her family have received support from staff and patients. “He loved the staff and he loved the community. He loved what you guys stood for, what the health center stands for — for integrity, compassion and making sure everybody has equal treatment no matter who they are.”

A plaque dedicated to Manifold was unveiled during the ceremony.

Runners and walkers of all ages joined in. Following the race, medals were handed to winners categorized by age groups.

About 15 vendors sold gently-used clothing, jewelry and homemade items during a yard sale at the center. Proceeds from the cost of vendors renting the space went to upgrading the outdoor track.

Public library representatives read stories and provided activities for kids during the event.

Friends and family donned T-shirts, which had a phrase coworkers and family members remember Manifold saying.

On a regular basis, before Manifold would leave the health center, coworker Sheena Mackenzie, who worked with Manifold for 20 years, said he would raise his arms, and tell staff, “Carry on, people!”

Manifold was killed in a vehicle accident in January. His wife, Demetria, and mother-in-law, Marion J. Brewer, also died in the accident.

Current Chief Financial Officer Charles Allbaugh, who was among several CVHS leadership and staff membersto run the 5K, said Manifold’s sincere respect and care for others allowed him to consider Manifold a mentor.

“He always had a smile on his face,” Allbaugh said. “He had a genuine regard for everyone no matter what their position.”

The former Dillwyn Primary School building at the intersection of U.S. Route 15 and Route 20 just south of Dillwyn... read more