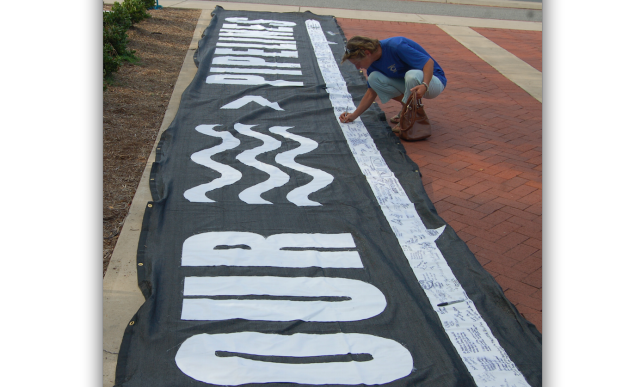 During the hearing, about 23 people spoke in favor of the ACP and approving the draft water quality certifications while 51 spoke against the pipeline and in support of denying the certifications.

A peaceful protest took place in front of Jarman Hall prior to the hearing that included anti-pipeline songs and project protesters holding signs that indicated opposition to the pipeline, including a large banner that had a greater than symbol facing in the direction of a symbol for water with the less than end of the symbol facing “pipelines,” with the concept of water represented by three curving lines.” People also held signs that read “This is robbery.”

“We need to protect the commonwealth; please deny the permits,” Carver said.

Cumberland County Administrator and County Attorney Vivian Seay Giles also spoke during the hearing on behalf of the county’s support for the pipeline, encouraging DEQ to approve the pipeline without further delay.

Giles’ comments following a recess lasting only a few minutes taken by Heather Wood, a member of the state water control board, and Melanie Davenport, DEQ director of water permitting, due to a crowd member interrupting a pipeline proponent’s comment — at which point caused an uproar from the audience.

During the second half of the four-hour long hearing, one speaker pulled an empty glass out of her pocket while reciting a poem she’d written in opposition to the ACP. Following her comment, she was escorted out of the room by Longwood University Police.

Paul Wilson, the pastor of Union Hill and Union Grove Baptist churches — both of which could be impacted by the construction of the project — spoke during the hearing.

“It has been my observation that this total process is flawed,” Wilson said. “It overwhelmingly and disproportionately supports big business.”

The project includes a 53,783-horsepower compressor station that would be built on property between Shelton Store and Union Hill roads along Route 56 in Buckingham County near the two churches.

Joseph Jeeva Abbate, of Yogaville, said construction of the pipeline and potential leaks could impact the James River, the farm at Yogaville and residents’ livelihood.

“The proposed site for the ACP Buckingham compression station is located five miles from Yogaville,” Abbate said. “…We are concerned that the current review process does not include consideration of the … combined impacts of both ACP and MVP (Mountain Valley Pipeline) and that’s a consideration we would request.”

Kenda Hanuman, who lives in Buckingham and is a member of Friends of Buckingham, said she depends on well water for all of her water needs.

“I would guess the majority of the people on the proposed pipeline (path) do get their water from wells,” Hanuman said. “Our water is not negotiable.”

In an April press release, DEQ officials said “in keeping with Gov. (Terry) McAuliffe’s commitment that the Atlantic Coast (Pipeline) and (MVP) will be constructed in the most environmentally protective manner, the DEQ has notified ACP and MVP that in addition to utilizing the U.S. Army Corps of Engineers nationwide permit 12 for wetland and stream crossings, DEQ will be requiring individual 401 water quality certifications for each project.”

The release stated that there would be a period for public comment and review. Officials said once the comment period has concluded, the proposed final certifications will be brought before the State Water Control Board.

According to a DEQ press release, 401 certifications place conditions on activities in upland areas that are near state waters and that may indirectly affect state water along the pipeline routes.

Federal regulators say the proposed project “would result in some adverse effects” and most of the anticipated impacts “would be reduced to less-than-significant levels” through implementing recommendations by the Federal Energy Regulatory Commission (FERC) staff.

The FERC’s release of its voluminous Final Environmental Impact Statement (FEIS) recently noted that ACP and Dominion Energy Transmission Inc. (DETI) “would minimize impacts on the natural and human environments during construction and operation of their facilities by implementing the numerous measures described in their respective construction and restoration plans.”

During the hearing, Joel Henry, of Richmond, said as a college student he felt the pipeline was important because it connects the places where gas is produced to where people are who need it.

Buckingham resident Heida Dhivya Berthoud asked, “Who would want to live here when you can’t drink your own water, you can’t bathe in it (or) wash dishes?”

Danny Watson, of Amelia, said those who would work on the pipeline value a culture where accidents are unacceptable.

“I can attest to the high-quality training and standards workers for this project must need,” Watson said. “… If we aren’t safe our community and families along with our own lives are at risk.”

Ronald Wilcox said the energy and jobs were needed.

“I can guarantee you one thing. I heard something that astonished me moments ago,” Wilcox said. “The (ACP) is not Auschwitz. It has nothing to do with hurting people. It’s a clean energy source of natural gas.”

According to a DEQ press release, the public comment period to receive written comments on both ACP and MVP is through Aug. 22.

The Virginia Supreme Court has reversed a decision by Buckingham Circuit Court Judge Donald C. Blessing who ruled that a... read more