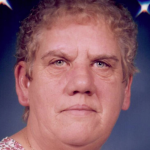 Funeral services will be held on Wednesday, August 23, 2017 at 2 p.m. at the Buckingham Baptist Church, Gold Hill, with interment in the church cemetery.  The family will receive friends prior to the service, beginning at 1 p.m.

Memorial contributions may be made to the Buckingham County Rescue Squad or the Arvonia Fire Department. Dunkum Funeral Home is serving the family.