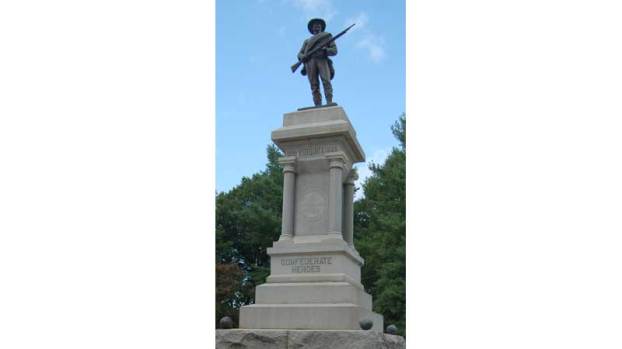 The Defenders of State Sovereignty Confederate Soldier statue on High Street in Farmville was erected on Oct. 11, 1900 by Confederate Veterans and Daughters of the Confederacy. (Photo by Morgan White)

The Town of Farmville is not taking a stance at this time regarding the removal or relocation of the Defenders of State Sovereignty statue located on High Street — which was erected by Confederate Veterans and Daughters of the Confederacy on Oct. 11, 1900.

Town spokeswoman Kate Pickett Eggleston, who related the town’s stance, said the property where the statue is located is owned by the town.

In an Aug. 16 statement, Gov. Terry McAuliffe encouraged discussion across the state regarding taking down Confederate statues and relocating them to museums or more appropriate settings in response to violent white supremacist protests in Charlottesville, which resulted in the death of three people Aug. 12.

“The discussion regarding whether to relocate Confederate statues is an important and legitimate conversation that should take place in each community that contains one,” McAuliffe said. “Monuments should serve as unifiers, to inspire us collectively and to venerate our greatest citizens. Unfortunately, the recent events in Charlottesville demonstrate that monuments celebrating the leadership of the Confederacy have become flashpoints for hatred, division and violence.”

“As we attempt to heal and learn from the tragic events in Charlottesville, I encourage Virginia’s localities and the General Assembly — which are vested with the legal authority — to take down these monuments and relocate them to museums or more appropriate settings,” McAuliffe said. “I hope we can all now agree that these symbols are a barrier to progress, inclusion and equality in Virginia and, while the decision may not be mine to make, I believe the path forward is clear.”

Heather Heyer, 32, was killed when a 20-year-old Ohio man, James Alex Fields Jr., drove a car into a crowd of counter-protesters. Fields injured 19 others.

Lt. H. Jay Cullen and Trooper-Pilot Berke M.M. Bates of the Virginia State Police also died when the helicopter they were using to assist in patrolling the protests crashed outside of Charlottesville.

“Ridiculous. What will pulling down a statue change?” Farmville resident Wade Clements commented on The Herald’s Facebook page. “This country will never move forward until people start loving more and hating less. How long ‘till we start tearing down other national treasures built with slave labor?”

Dr. Carl Riden, of Farmville, said most Confederate statues were erected in the post-reconstruction era as a way to intimidate black Americans as Jim Crow-era ideals became the law.

“Many people have been upset about them for years and many African-American and social-justice organizations have put forward proposals to have them removed in the past,” said Riden. “Now is simply a time when many people have decided to add their voices to that call.”

“Removing statues isn’t going to change history,” said Marianne Snow Campbell, of Farmville. “The history is still there. I definitely think that we and our kids should keep learning about the Civil War.”

Campbell said there were many living in the South who look at Confederate statues as a constant reminder of people who fought to defend slavery and violence against African Americans.

Chuck Graves, of Buckingham, said the statues were beautiful.

“All this is doing is giving a bunch of whiners their way and pushing all this entitlement mess in the faces of the true, hard-working Virginia Americans,” Graves said, regarding McAuliffe’s statement.

Catherine L. Gantt, of Farmville, said the statues should be left where they are.

According to section 15.2-1812 of the Code of Virginia, a locality may, within the geographical limits of the locality, authorize and permit the erection of monuments or memorials for any war or conflict,” to include a number of U.S. wars, including the American Civil War.

The law cites, “If such are erected, it shall be unlawful for the authorities of the locality, or any other person or persons, to disturb or interfere with any monuments or memorials so erected, or to prevent its citizens from taking proper measures and exercising proper means for the protection, preservation and care of same.”

The Herald’s Facebook post regarding McAuliffe’s statement received 59 comments that were of a contentious nature, some regarding criticism of the governor. A majority of the comments were in support of leaving monuments where they are, while some comments cited Confederate statues as being offensive to minorities. Approximately 29 people commented against removal and relocation of confederate statues while approximately nine people commented in favor. Those whose comments were not clear in their support or opposition were not included in the count.