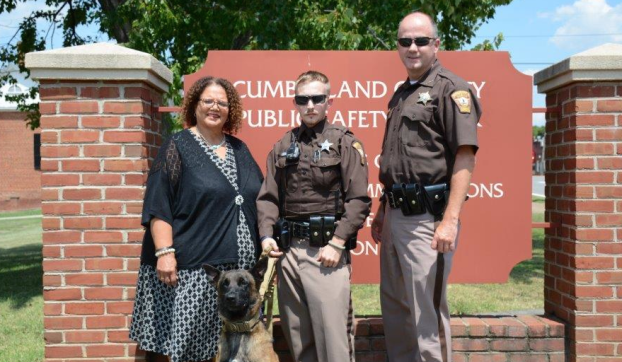 The Cumberland County Sheriff’s Office has a new K-9 unit that will be used to combat illegal drugs.

According to a press release, the dog is a young Belgian Malinois that was purchased utilizing asset forfeiture funds donated by the Cumberland County Commonwealth’s Attorney’s Office.

“In cases where the assets of a drug defendant are proven in court to derive or stem from the sale of illegal drugs, state law allows those assets to be seized and used for law-enforcement purposes,” said Pat Scales, commonwealth’s attorney for Cumberland County, in the release.  “I’m glad that the funds were available to assist in the purchase of a drug-sniffing dog to help fight illegal drug activity in the county.”

Cumberland County Sheriff Darrell Hodges said he looks forward to the prospect of once again having a drug dog with his agency.

“I’d like to thank Ms. Scales for using her agency’s asset forfeiture funds to purchase this K-9 to help combat illegal drugs in Cumberland,” Hodges said in the release. “We look forward to having this opportunity to better serve the community.”

Hodges said in an interview the county hasn’t had a K-9 unit in the past couple of years.

“Sometimes we’ve had dogs to retire, officers to leave the department, other things like that and we didn’t have a current K-9 handler,” Hodges said.

Hodges said the K-9 is an invaluable tool for officers to have at traffic stops and other places because dogs can detect things that humans can’t.

The release cited the dog’s handler will be Sheriff’s Deputy Ryan Bates, who joined the sheriff’s office in last January.

Bates and the dog will enter the K-9 academy later this month where they will train together as a team.

“I’m excited about the opportunity to be the dog’s handler,” said Bates in the release. “My dog and I will be in training from late August through mid-November, and it’ll be great to bring him back to work in the county.”