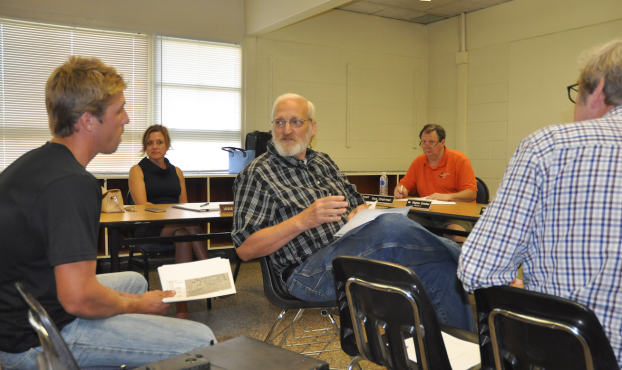 The Cumberland County Planning Commission unanimously agreed to recommend a conditional use permit for a general store at the southwestern quadrant of Plank and Airport roads in southern Cumberland July 24.

Benjamin Lapp, owner of Ben Henry Construction in Farmville, made the initial proposal for the general store, called Lapp Store.

Lapp, who’s worked with members of the Amish community in Cumberland and surrounding counties, said the store would be primarily operated by and sell produce for the Amish, though the store and its produce are welcome to everyone.

According to county records, Lapp has met with the Virginia Department of Transportation (VDOT) to discuss the building process.

Lapp said he has hired an engineering firm, Maxey & Associates P.C. to address VDOT, the Health Department and county requirements due to the proposed size of the property, which is projected to be between 3-4 acres.

Records cite that the property is not within a designated growth area established in the 2013 Comprehensive Plan.

Planning Director Sara Carter, during the commission meeting, noted that the growth area begins across the road from the proposed general store.

Carter recommended Lapp’s permit be approved by the state’s Department of Environmental Quality (DEQ) to avoid potential problems with water and soil erosion to the store building and parking area.

Only one citizen, Charles Anderson, of Cumberland, spoke during the meeting. He cited concerns that the proposed store would change the environment of his neighborhood and the land he and his brother, Jordan, own, which is close to the store.

“I feel very safe around the Amish; they’re great neighbors,” Charles said. “But, I want some assurance that that this isn’t going to turn into a … gasoline, alcohol center right in front of our neighborhood.”

Lapp said Amish citizens in the area would operate the store and would be the ones to make decisions about the hours of store operations and the items sold, including alcohol.

He said the store may be similar to Yoders Country Market in Madison, which sells bulk foods and homemade items and is also operated by Amish families in the region.

He said the store would be designed like a barn that may have some exposed beams and would have electricity. The store would most likely open in the morning with breakfast foods patrons can take with them, and would close by dark. Lapp said he does not anticipate late hours.

Anderson asked if there would be a restaurant inside of the store, and Lapp said there are no plans to add a restaurant.

He said the store may have some holiday events, for example, bringing an ice cream truck to the store July 4, and he said it may not be uncommon to see a horse and buggy parked beside cars.

Following the public hearing and discussion, the planning commission voted to recommend the conditional use permit for the store to the Cumberland County Board of Supervisors.

A public hearing for the store will be held by supervisors Aug. 8 at  7 p.m. in the circuit court room at the Cumberland County Courthouse.