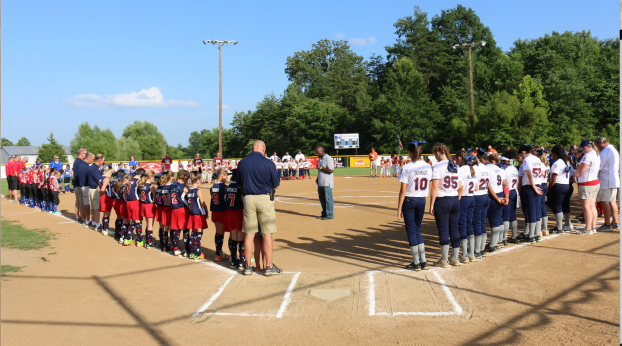 Success on the diamond starts at home

Support and a platform for success can mean a lot to a young athlete, and it can enrich a community as well. It is a time of great success for youth softball and baseball teams competing in the Heart of Virginia. The Prince Edward-Farmville Youth Association (PEFYA) Ponytails All-Star team, lined up at right in the photo above, has become the state champion, earning a trip to Sumter, South Carolina, for the 2017 Dixie Softball Ponytails X-Play World Series, which starts July 29. The team’s run started at home in Farmville, which hosted the District 1 tournament. Part of the opening ceremonies of that tourney are pictured above, as Cedric Gayles offers an opening prayer. The PEFYA Ponytails swept the competition in that tourney to reach the state level, and they are still undefeated this summer. The Buckingham County Youth League Majors All-Stars have also energized the region by advancing to Oxford, Alabama, for the 2017 Dixie Youth Baseball Major League World Series, which starts next month. As of this writing, there may also be other All-Star teams from the area bound for the World Series in their respective age groups and divisions. The community is to be commended for giving these young athletes an opportunity to succeed, and the athletes are, in turn, to be commended for taking advantage of the chances given them, bringing the community together in the process. (Send “Way to Go!” photos with a description and names to WayToGo@FarmvilleHerald.com.)

The hard work and dedication by parishioners at White Hall United Methodist Church on Main Street in Dillwyn to spruce... read more