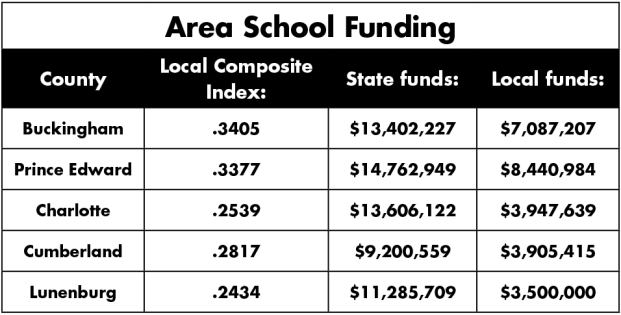 Editor’s note: This story examines how expectations are set for local and state funding of public schools. But is it a good system? School administrators and state legislators weigh in on the issue.

Changes are needed, but it’s not that simple when it comes to the system of public school financing in Virginia. The sentiment above illustrates what a number of those interviewed for this article feel when it comes to the Local Composite Index (LCI), a formula that’s used to determine what a locality is expected to pay for their school systems and what funds the state is willing to allocate to local school systems.

Buckingham County Public Schools Superintendent Dr. Cecil Snead said that in addition to those factors, the state also looks at average daily membership (ADM) of a school system, which averages how many people regularly attend the school and the total population of the county.

The .3405 that Snead mentioned is Buckingham’s LCI. It means that the county, after adjusting the decimal to a percentage, is able to pay for 34.05 percent of their total expenses.

“What that means is that whenever there is funding from the state, under the Standards of Quality, they require that the locality meet what’s called required local effort,” Snead said. “So we have to, as a school system, do a report to ensure required local effort is being met in order for us to get our share.”

“My feeling in general with regard to the funding formula at the state level is that over the years there have been so many different adjustments through different general assemblies that what’s happened is the school systems, or in Buckingham’s situation anyway, we come out on the short end of the stick,” Snead said.

Snead added that the General Assembly meets each year and may make recommendations to the Virginia Department of Education.

“Or they may make laws, in fact, and those requirements are not always considered in the funding formula,” Snead said. “What I have come to realize over many, many, many years is that the changes at the state level do increasingly put burden on the localities. And I don’t think it’s hard to argue for that point.”

Snead also explained that if the locality only paid the amount laid out by the LCI, the school system would not be able to run.

Prince Edward County’s LCI is .3377, meaning the county is required to pay 33.77 percent of the total cost. In FY 2018 the state’s allocated funds to the locality total almost $14.763 million and local funds total more than $8.4 million.

Cumberland County Public Schools’ LCI is .2817, meaning the locality is required to pay 28.17 percent of the total cost of the school system. The school system received more than $9.2 million for FY 2018 and was allocated more than $3.905 million from the county. The division’s superintendent, Dr. Amy Griffin, said she wasn’t so sure that the issue is the LCI for a place like Cumberland, because it does not take into account that, given the Cumberland economy, the system needs more support from the state than from the locality.

She agreed with Snead’s stance on unfunded Standards of Quality mandates.

Lunenburg County Public Schools’ (LCPS) LCI is currently .2434, meaning the locality is required to pay 24.34 percent of the total cost. The school system was allocated more than $11.285 million in state funds for FY 2018 and was provided approximately $3.5 million in local funds.

“Local, state and federal officials need to devise a plan of action and a response to the funding of public education to meet the needs of maintaining an educational system for the 21st century where the burden of funding is not placed on just one entity,” said Charles Berkley, the LCPS superintendent.

He said class sizes have gone up significantly in Lunenburg, especially with special education and English as a Second Language (ESL) students.

“Programs and services have been reduced, employee compensation has gone up immensely,” Berkley said. “This challenged us when the recession started and the state funding decreased and continues to worsen.”

Charlotte County Public Schools’ LCI is currently .2539, meaning the locality is required to pay 25.39 percent of the total cost for the school system. For FY 2018 the school system was allocated more than $13.6 million in state revenue and almost $4 million in local funds.

State Sen. Frank Ruff, R-Lunenburg, said the LCI generally serves the area very well, “or better than some other ways would.”

“Whenever you tinker with anything, there’s going to be somebody else that wants to tinker with it also, so you may end up in a worse situation than when you started out,” Ruff said. “Considering the population of Northern Virginia and any other group, whether it be Richmond or Tidewater, they could outvote us on anything.”

He said any discussion about changing the LCI is a dangerous game, “because we end up short-handed in almost any situation. Is it perfect? No, but I have not heard of anybody that has come up with one that’s any better.”

Ruff also addressed requirements for the schools updated annually in the General Assembly.

“You need to look at any particular mandate and look at it in different ways,” Ruff said. “The one most expensive mandate is raises for teachers.”

Ruff indicated that when the state says it’ll give a raise to teachers, it’s indicating that it will give its portion contingent on the locality giving its own portion as well.

“Once that is baked into the pie, in the (years after) it becomes part of the budget of that county. So a raise this year is built into the budget next year,” Ruff said. “A raise that’s not given this year puts that particular community behind in future years.”

“One of the first things I (noticed) with the legislation that we had when I was there in January and February this past session was (the) putting (of) some kind of unfunded mandate on local schools,” Peake said. “That’s what I am trying to fight. I think they are correct — a lot of times in Richmond we come up with these great ideas or what we perceive to be great ideas… in the past we have just passed them down to the local schools without funding them.”

Peake also said that every region in Virginia wants to change the LCI to benefit their own region.

“I think right now with the way it’s been, the rural legislators have done a pretty good job at keeping it pretty fair,” Peake said. “I think the more urban golden crescent-type areas have been wanting to change it more than we have allowed, but I am not aware of any push right now to change it.”

Peake said there do not appear to be any gross injustices in the LCI at this point.

The LCI was something that wasn’t put into practice until after the Burrus v. Wilkerson case in 1971. According to Virginia Tech graduate school finance professor Richard Salmon, who has conducted national research studies for a series of state studies, the case came at a “fortuitous time.”

“It caused the General Assembly to look it over pretty carefully when they were in (the process) of also putting together the new (state) constitution,” Salmon said. “They got a consultant out of the University of Florida at the time… (he) essentially helped the committee or the commission that was studying the issue to come up with the index.”

Salmon said there are problems with the current LCI formula but that it is difficult to change the measure of capacity.

“Because if you change it, 50 percent of the population will be advantaged and 50 percent of it will be disadvantaged, so it’s a very divisive issue if you start to change the measure of capacity,” Salmon said.