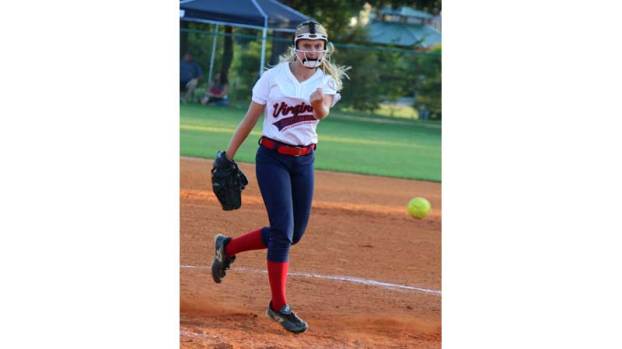 PEFYA Ponytails All-Star Alyson Lucas contributed to Virginia's 2-0 day at the World Series on Sunday with strong play in the circle. (Photo by Farrah Schmidt)

On Monday, the PEFYA Ponytails will face Alabama at 6 p.m.

Sunday’s night win improved the Virginia squad to 2-1 in the double-elimination event and 2-0 on the day.

“We hit good again,” Virginia Manager Larry Conwell said. “We had a few errors in the fourth inning that kind of gave them some runs, but we played good. We hit good, good defense — we had a real good all-around game, and I think Tennessee is probably one of the better teams we’ve played so far.”

The game was tied 1-1 after the first inning, but then Virginia went up 3-1 in the second and 6-1 in the third. Tennessee outscored Virginia 4-1 in the fourth to make the score 7-5, and each team scored two runs in the sixth to make it 9-7.

Virginia was in position multiple times to pile up even more runs.

Conwell said that on offense, Virginia was successfully stringing together hits, and it benefited from a lot of walks as well.

The win was preceded earlier in the day by Virginia’s breakthrough 15-0 victory over Texas.

At the end of his team’s 2-0 day, Conwell said, “That was the goal was to get some wins, and I was proud, and I think we’re playing good now … And I think maybe we’re just coming into form, and I hope to get some more wins.”