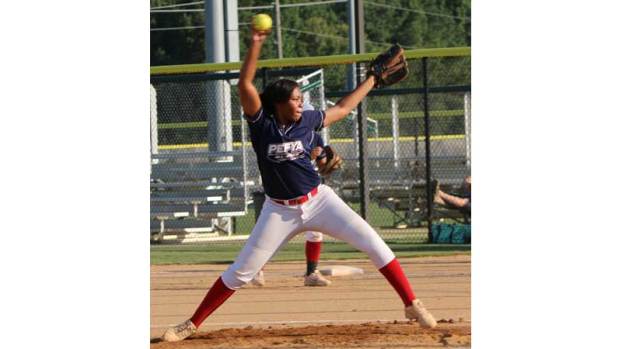 It was the first win at the double-elimination World Series tournament that the PEFYA Debs have achieved in the past two years after going 0-2 in 2016 and starting with a loss this year on Saturday.

Against Alabama, Virginia led most of the game and weathered a late comeback to win in the third extra inning.

“They fought,” Virginia Manager David Schmidt said of his players. “They fought very hard. Pitching was awesome from both pitchers, but everybody (on) the team just played great.”

Virginia held a 2-0 lead after the first inning, extending it to 3-0 in the third and 4-0 in the fourth. Alabama hit a home run in the bottom of the fifth inning to help cut the lead to 4-2.

Hannah-Gray Schmidt pitched well for Virginia, throwing five strikeouts in five innings. Shauneice Beasley relieved her in the fifth and pitched the rest of the way, throwing four strikeouts total.

Alabama tied the game up in the bottom of the sixth, and the scoreboard remained unchanged until the top of the 10th.

But in the 10th, Gracie Hodges scored the go-ahead run off of a hit from Alexa Marzloff, and the Virginia defense held firm in the bottom of the inning, with Beasley throwing a strikeout for the game’s final out.

Schmidt praised Virginia first baseman Sierra Wharam for some outstanding plays on defense, including catching a couple of foul balls right at the fence.

“Everybody on defense played hard, and I don’t think we had any errors,” he said.

Schmidt noted his players, nine of which were on last year’s Virginia squad, were quite excited to get their first win at the World Series level.

“It’s overdue,” he said. “They’ve just been nervous. And I don’t know why, but when they step to the plate, you can see where they’re a little nervous playing World Series (as) opposed to state, but hopefully this took the jitters out.”

The Buckingham County Youth League (BCYL) Minor League All-Stars were not able to carry their winning ways from the district... read more