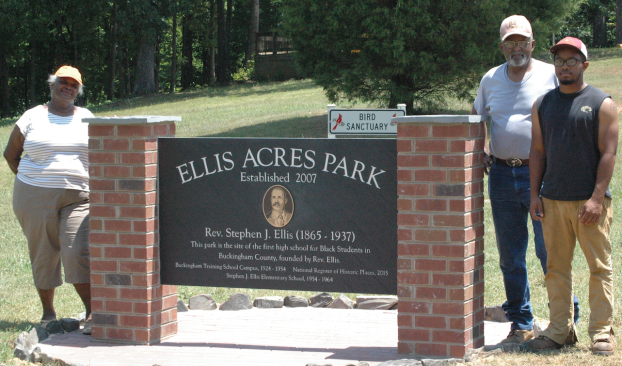 At the site of the former first segregated secondary school for African-American students in Buckingham County, residents are continuing the legacy of educating and empowering individuals by expanding Ellis Acres Memorial Park, which celebrates its 10th year.

Since the 9.25-acre park in the Town of Dillwyn first opened in November 2007, its leadership has installed a pavilion, a flag pole surrounded by memorial bricks and most recently new signage at the park’s entrance. Park officials are also set to build a community center and expand the park’s nature trail.

Featuring a portrait of Buckingham Training School Founder the Rev. Stephen J. Ellis and a description of the site’s history, the new sign was acquired from funds raised during the annual Ellis Acres Golf Tournament on June 10, held at the Manor Resort Golf Club in Farmville, Park Founder Wilbert Dean, of Buckingham, said.

The sign was designed by Joe Giles, who also designed the “America’s First Two-College Town” mural featured at the intersection of Third and Main streets in downtown Farmville.

The motto of the park, according to a news release provided by Dean, is “educate, empower and enhance.”

“If we can educate people, we can empower them to do something,” Dean said.

The Ellis Acres Memorial Park is named after Ellis, who received funds from community members and the Julius Rosenwald Fund to found a school after a request for the first African-American secondary school was denied by the county. The school, Buckingham Training School, opened in 1924. The school provided bricklaying and manual-labor training for male students and homemaking courses for female students.

This goal of educating and empowering people in Buckingham and the surrounding counties is what has driven Dean and the park’s executive board members to hold General Educational Development (GED) courses in the multipurpose classroom built into the park’s conference center.

The park also contains a playground, a basketball court and sand pits for kids, bench swings for adults, a nature trail and a culinary kitchen where visitors have learned about preparing healthy food options.

“Ellis Acres’ purpose is to fill that need,” Dean said regarding the park’s offerings working to empower individuals and families.

“We thank God for Wilbert Dean and his vision to revitalize that area,” Braxton said.

Braxton said the tournament has received support from numerous sponsors and members of Buckingham, Farmville and surrounding counties and towns. The funds raised through this year’s tournament enabled park officials to install the new sign.

“It’s a welcome source there for the people in the community,” Braxton said about the park.

Braxton said he will sometimes take his mother-in-law, who is 91, to the park. His mother-in-law attended Buckingham Training School, and the park, for both, brings back significant memories.

“We went through some things back (then),” Braxton said about the troubled education history in the county.

In addition to the annual golf tournament, people can also purchase memorial bricks, which are installed at the park, and they can donate funds to area churches and organizations that also raise funds for the park.

Enthralled by the arts

About 25 children between the ages of 7 and 14 channeled their inner artists during the Buckingham County Arts Council’s... read more