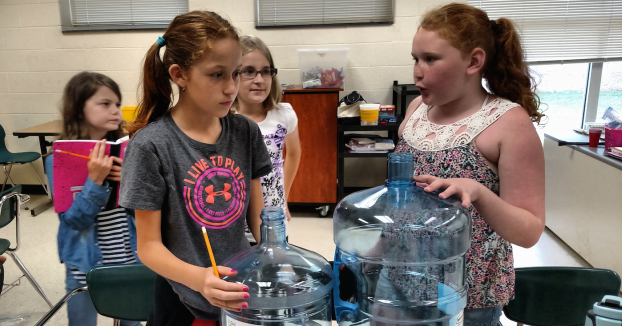 Pictured, from left, Sarah Bryant, Elly Abruzzo, Olivia Cummings and Annabelle Bryant use three- and five-gallon jugs to determine how to get four gallons of water from both jugs. The brain teaser was one of several activities gifted elementary school students in Buckingham County were challenged with during the county’s first summer gifted program (picture by Linda Ruffner).

Ruffner said one of her gifted students lamented that the student activities during the school year couldn’t continue into the summer.

The student’s statement gave Ruffner an idea, and she consulted the school’s principal, Bryan Jackson, who greenlit a summer program for gifted students.

“One of my gifted students sadly asked, on the last day of our after school gifted program, why we couldn’t keep working during the summer,” Ruffner said. “I approached my principal, Bryan Jackson, who agreed a summer program would be beneficial. He took the idea up to central office and it was embraced there.”

The program was held at Buckingham County Middle School for two weeks during the county’s regularly scheduled school hours from 8:30 a.m.-2:30 p.m.

The activities primarily focused on the book chosen for the program, Lois Lowry’s “Number the Stars,” about a family’s experience during World War II.

Between 12 and 16 elementary school students took part in engaging and hands-on activities, including cooking a Depression Cake, a recipe often made without milk, sugar, butter or eggs and planting lettuce for miniature victory gardens, which were used during the war when goods were typically rationed for soldiers.

Ruffner, who described herself as a history geek, said the book allowed students to explore the historical period using diverse skills, teaching important lessons about kindness.

“It’s a wonderful book with a central message about bravery and making a difference by small acts of courage. It lends itself well to extensions in all subject areas. We wrote, created art, did math, cooked, did science experiments and delved further into World War history,” Ruffner said. “The kids loved it and were especially intrigued by stories of life during the war here at home.”